Aldabra has not left her slip since we arrived in April. For the first several weeks after we arrived, Dana and I stayed on the boat and worked on projects. Pat would join us on some weekends because working on the boat was a good break from his real job.

We put in a new macerator pump for the forward holding tank and reattached the hoses. (My first unsupervised electrical project.) We removed the forward water tank and checked for leaks. Finding none, we put it back in. We also replaced the fill line for the forward water tank. The original hose was the kind that was reinforced with metal wire and it had rusted, so particles of rust were getting into the tank. It was really hard to get the old hose out but we felt a huge sense of accomplishment to have a new, clean one in place. And of course, we changed the engine oil and oil filter. We also did regular cleaning and maintenance on both Aldabra and the dinghy.

During those first few weeks, San Diego was a ghost town. We could go to a few stores for supplies. We could walk the path along Harbor Island and eventually walk along the beach. But most places that I wanted to show Dana were closed. Balboa Park, Presidio Park, Cowles Mountain.

Toward the end of May, Dana moved back up to Santa Cruz, and I headed back to Mexico by plane with my friends Tom Wurfl and Mark Coleman. We delivered Wind Rose, owned by our friend Steve Roberts, from Puerto Vallarta to Ventura. Based on what I wrote about the bash on Aldabra in March/April, it would seem as though another bash would be crazy. But the second one was quite pleasant. It helped that I was better equipped with warm clothes and that the weather was warmer. It also helped that we didn’t have the drama of uncertainties that we had in March.

The trip was quite straightforward, taking under two weeks. We picked our weather windows and kept moving, stopping briefly in Mazatlan for (I think) one night and in San Jose del Cabo for 30 minutes for fuel. We then stopped in Bahia Asuncion for fuel and to wait out some stronger wind before going to Ensenada. We arrived in Ensenada in the early morning and were checked out and underway again by early afternoon. (Rather than waiting for the exit papers, we asked the marina guy to email them to us once he got them. If we had been stopped by the Mexican Navy, they would have turned us back to the marina, but fortunately we were never stopped and we did get the emailed papers in short order.)

We had a couple of things break on the northbound trip. Tom and Mark did temporary fixes and when we got to San Diego, the parts were waiting and they executed the repairs in less than 45 minutes, repairs that would have taken me all day. (Replacing the fresh water pump and a fitting for the dripless shaft seal.)

After spending the night in San Diego at Tom and Helen’s house (a nice meal, a shower and a full night’s sleep), we headed up to Ventura and were met by Steve the next morning in his marina. My first professional boat delivery. I hope there will be more.

Once I returned to San Diego, I moved off the boat and into my mother’s house. My very generous brother-in-law has loaned me his car so I can return to the boat several days a week to continue with projects. Pat helped me reinstall a sensor for the forward water tank and wire in a new red and green bow light for night navigation. He also helped me remove the two bow rollers and rebed them. Aldabra had taken some water in at the bow, and I’m hoping we have corrected the problem. I still need to test it with large volumes of water.

The current project is a big one. Tom removed the counter tops in the galley, which was not an easy job. I then used his oscillating multi-tool with a scraper blade to remove the silicone. One the surfaces were cleaned up, I painted the wall behind the galley. Next, Tom drilled holes in the surface and we began pouring foam insulation into the space between the boat hull and the refrigerator, stove and freezer. I’m hoping the insulation will help the refrigerator maintain its temperature better in warmer climates. We’re not done yet, but the results have been encouraging. The only “oops” was when the foam found its way unexpectedly into a couple of compartments that didn’t need any foam. I had to cut those foam surprises out. (From the time you combine both Part A and Part B into a bucket, you have 30 seconds to stir them up and another 30 seconds to a minute to get the foam poured into the hole before it starts expanded. The temperature needs to be 74 degrees and low humidity. We’ve been able to achieve the right temperature in the early morning but it hasn’t been possible to have a low humidity day recently.)

Today, the counter top guys came to make a template. The next step is for them to manufacture the new counters, with a big, single sink. I can’t wait.

I’m also waiting for all the salon cushions to be reupholstered. I’m actually glad that they’re off the boat while the galley project is underway, but I do have to pester the guy doing these. 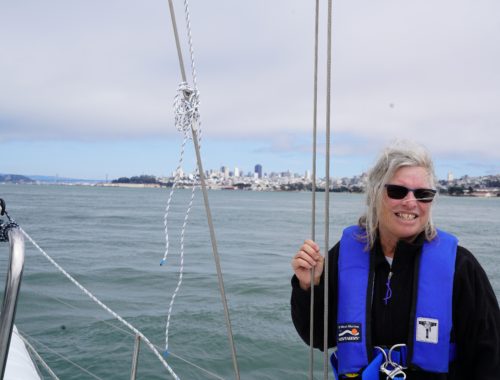 Getting Ready to Leave Banderas Bay