Crew Steve, from California, joined me on Aldabra on June 8. He flew into Loreto and took a taxi to Puerto Escondido. We took off almost immediately and sailed fourteen miles north to Loreto. After anchoring right off the town marina, we went to the El Pescador market to provision and then returned to Aldabra to stow the groceries before heading back into town for dinner. On the way into town we stopped by to see John and Julie on Myla, who were anchored nearby.

The next morning, we pulled up the anchor and motored in glassy waters with no wind to Agua Verde, and anchored off the main beach. We took the dinghy over to the east cove for some snorkeling and then had tasty carne asada tacos as the cooperativa restaurant near the east cove. We talked with an old fisherman about how the local fishery is being depleted by outside fishermen who use spear guns to take huge hauls in a very short time. We also talked with two enthusiastic young guys from Austin on a road trip who decided to stay in Agua Verde for s few more days and cancel the rest of their planned itinerary. It was just that nice there.

The next day, the west cove emptied out and we quickly moved Aldabra over there. It was an ideal spot and we used it as a base to go snorkeling around Roca Solitaria and take a walk on land. 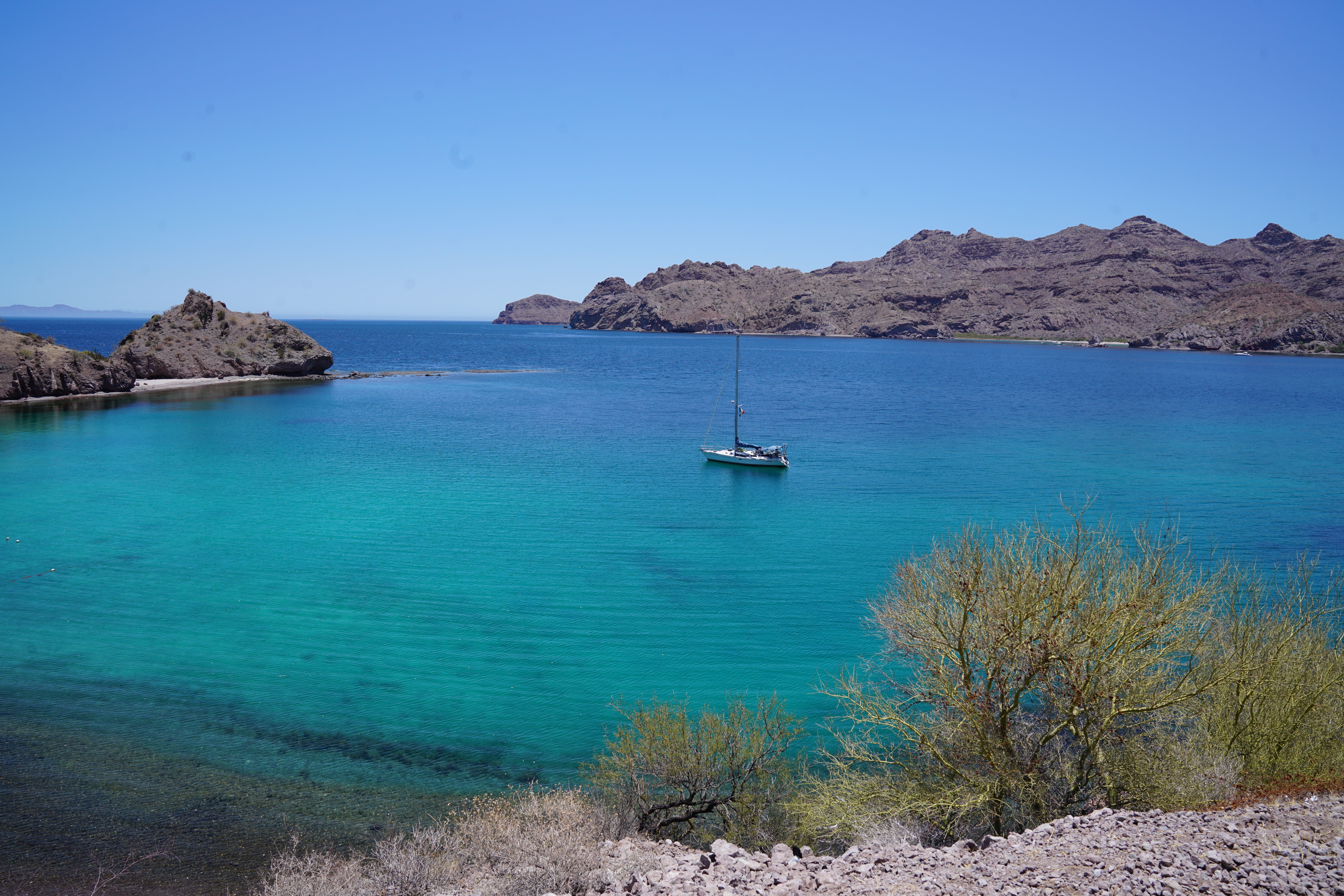 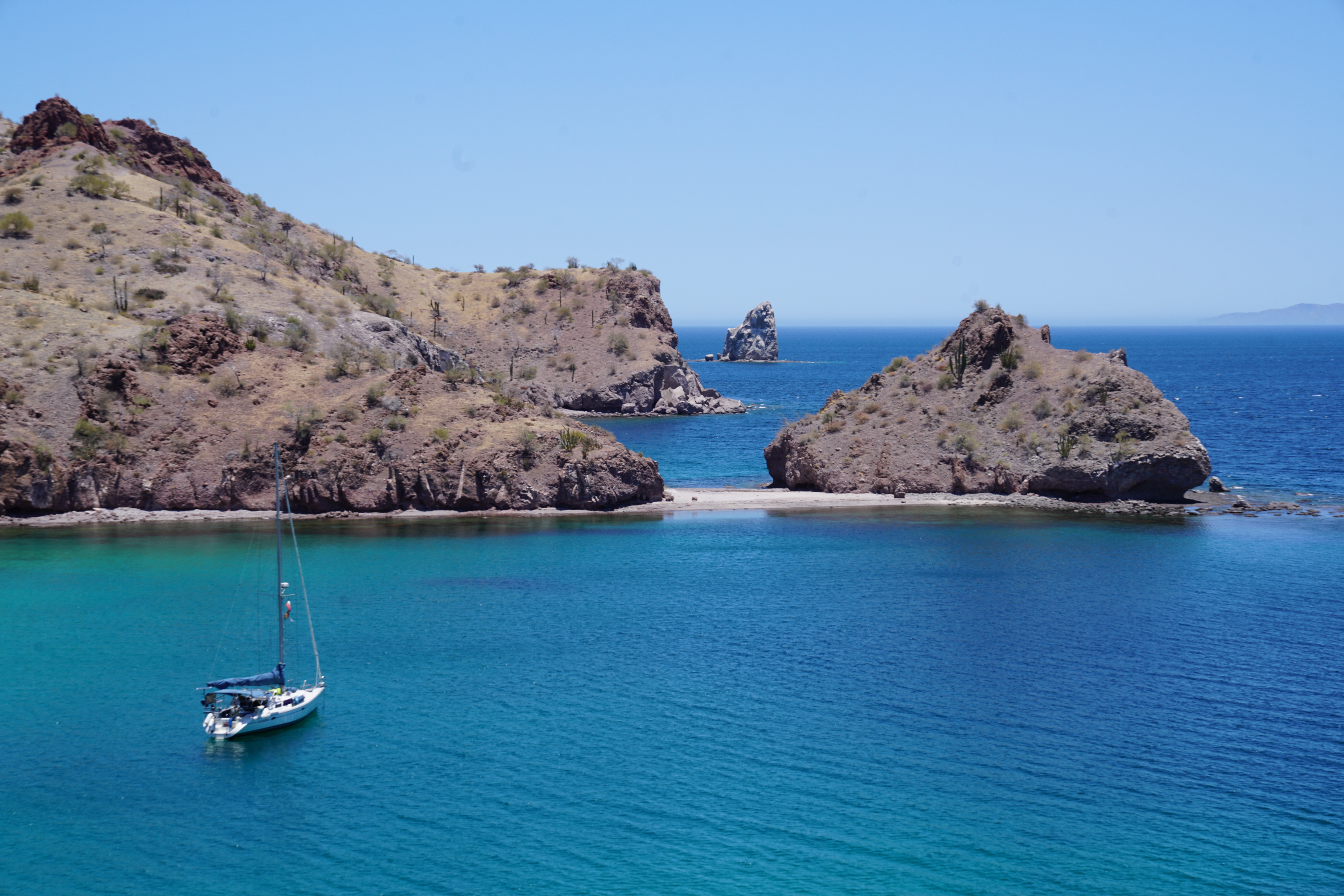 The far rock is Roca Solitaria 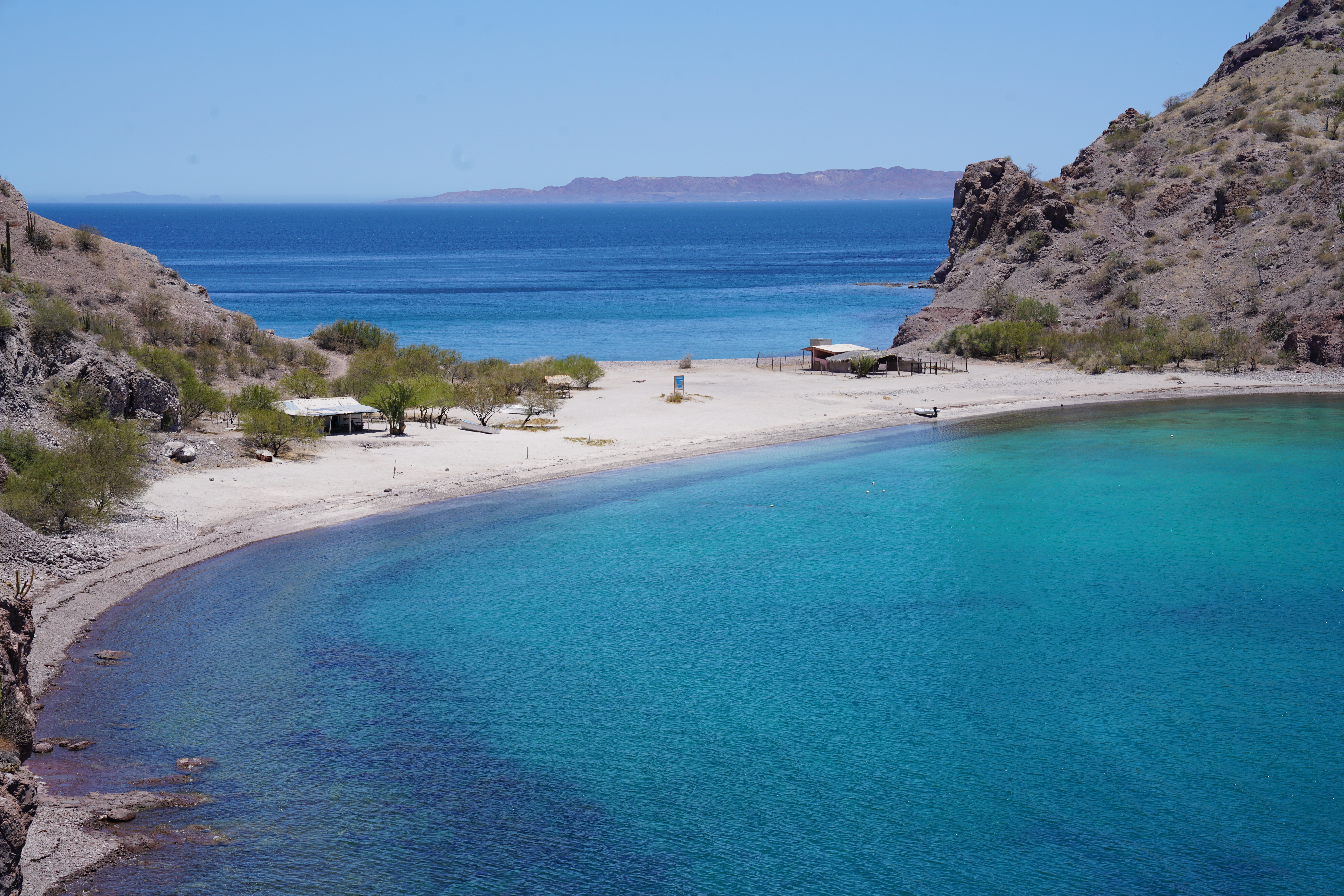 The beach next to the west anchorage 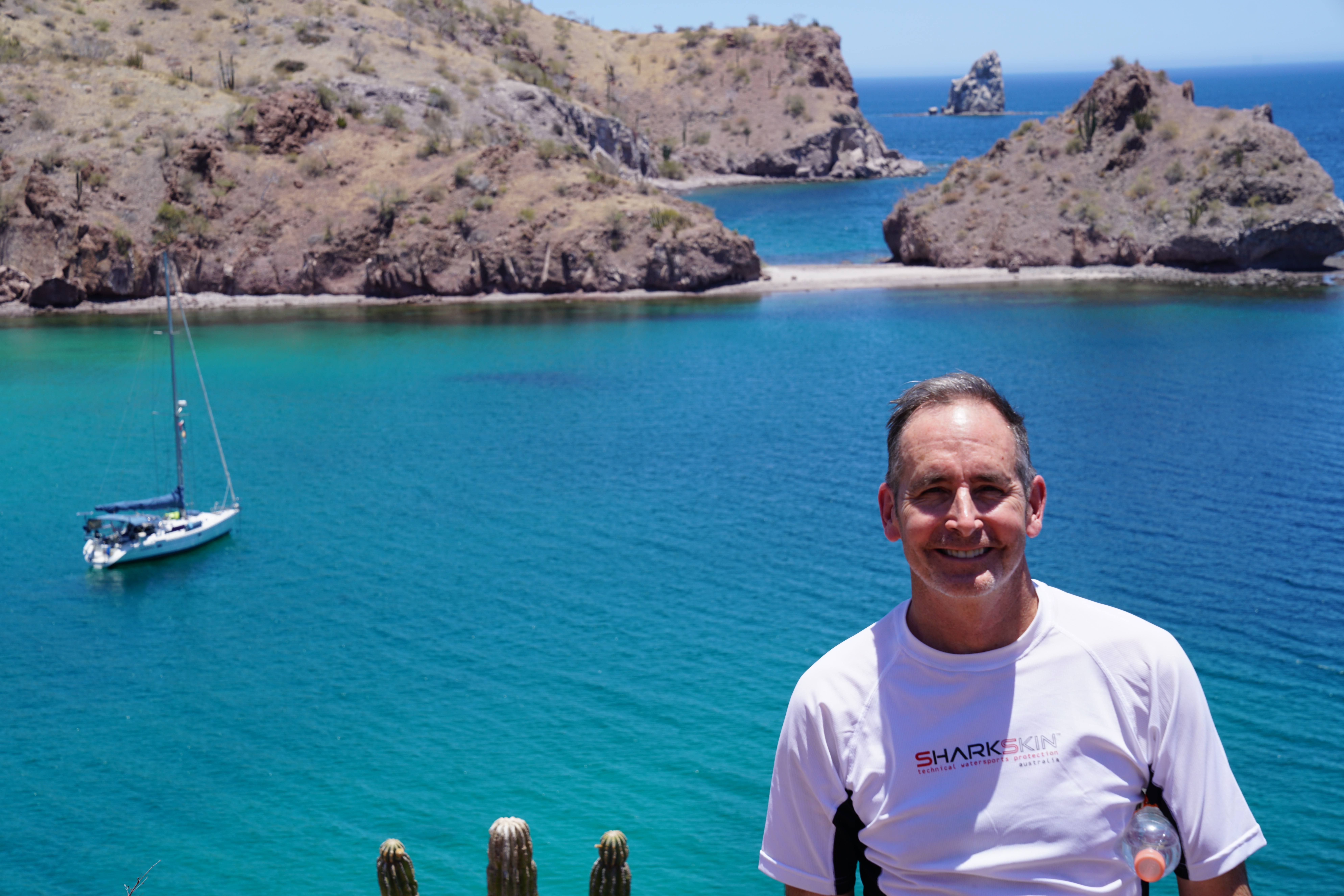 That evening, Rick and Cindy on Cool Change surprised us and anchored in our private cove. They had food already prepared, so they declined our invitation to go ashore for dinner. We had dinner with Will and Grant from Austin, at Maria’s, the other restaurant on the beach. And then went to visit Rick and Cindy. I hadn’t seen them since I left La Paz in April, so it was delightful to catch up with them.

As lovely as Agua Verde was, we needed to push on southward. So the next day we motored to Puerto Los Gatos. The winds were light at first and then on the nose, so we never used the sails. Rick and Cindy had left earlier and we caught up with them right before the entrance to Los Gatos. By that time the seas had picked up a bit so they followed us in. They had planned to go much farther that day but the seas were working against them.

We had most of the day to spend in Puerto Los Gatos. I swam out to snorkel on the point and Steve took the dinghy to shore for his own expedition, which involved scrambling up the hill for an amazing view. That night Rick and Cindy came over to Aldabra for an enchilada dinner and hot chocolate chip cookies for dessert. It was a lovely evening, which provided no hint that it would be a lumpy night with swells coming in from the east that had miles of open sea to build. None of us slept well.

The next morning, neither boat wasted any time in pulling up anchor and heading south. We were headed through the San Jose Channel to Isla San Francisco. I was a bit afraid that we would have challenging conditions, but the seas were rather flat and the wind, although on the nose, was relatively light. Cindy and Rick ended up joining us at Isla San Francisco as well. They spent the remainder of the day getting ready to launch into their passage to Mazatlan. Steve went in the dinghy to explore around the point. And I just tinkered around on the boat. Right before dinner, Steve returned to report that he had been out in the channel with several small groups of minke whales that were feeding. I jumped in the dinghy and we picked up Rick and Cindy for a look. It was magical to turn off the motor and sit in the still waters and watch and listen to the whales as they surfaced and submerged.

That night in the Isla San Francisco anchorage was only slightly better than in Puerto Los Gatos. We didn’t have the big seas but we had a lot of wind. Had it not been for the whales, Steve might have been regretting his decision to join me on the trip. The next day, after Rick and Cindy left on their passage, we took the dinghy to the beach and hiked on the island. We covered a lot more ground than I had before and it was beautiful. That night, the whales were feeding out in the channel. But they also started coming into the anchorage. We figured out why. The anchorage was full of billions of little krill that were lighting the water up like stars. They were being pursued by the whales, as well as weird little worms and small white crabs. The evening provided quite a show, which more than made up for the fact that the winds made another uncomfortable night. 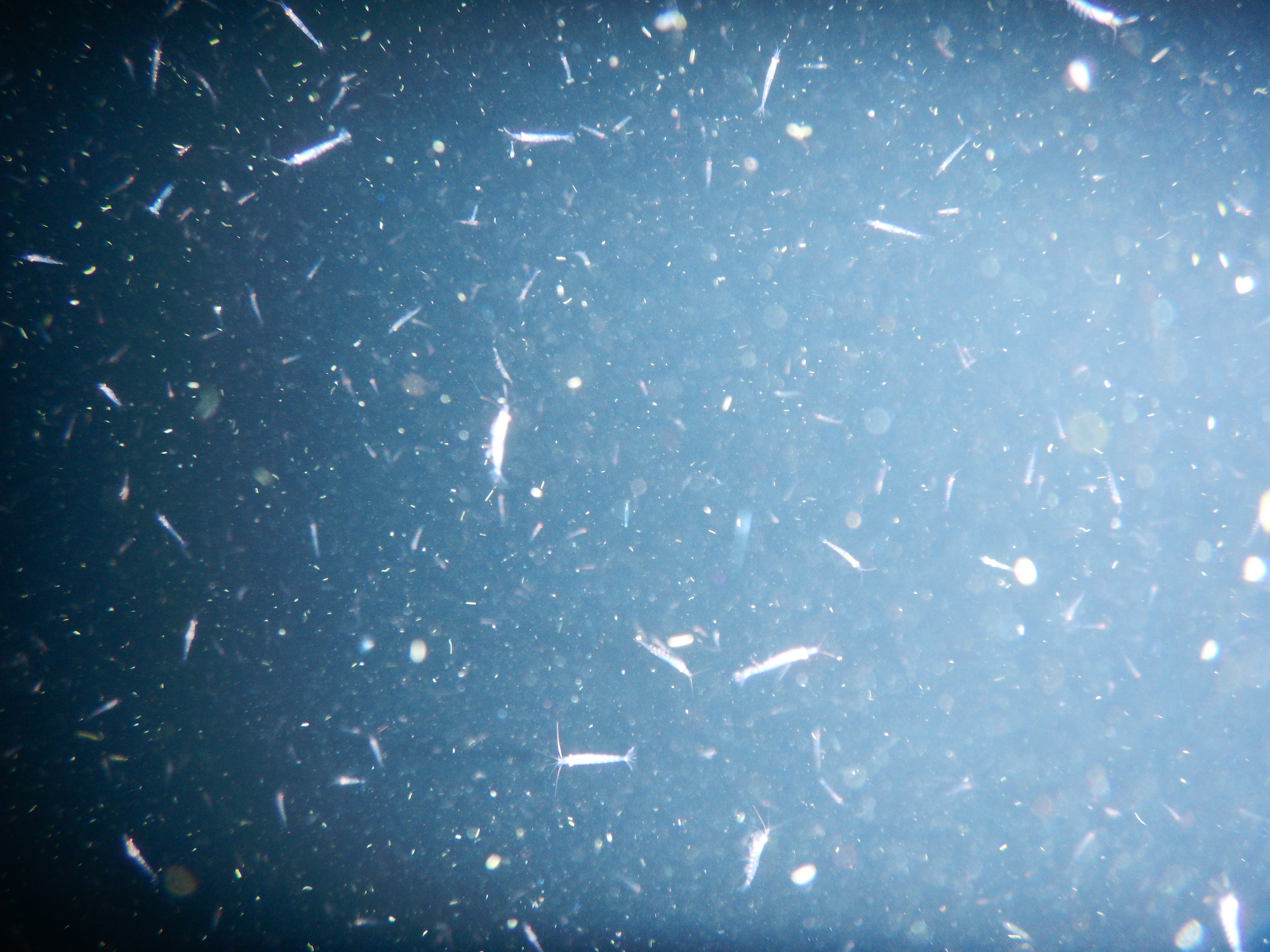 This is my attempt the photograph the kri

The next day was expected to be the only real sailing day we would have. So we sailed from Isla San Francisco to Isla Espiritu Santo, choosing Caleta Partida as our anchorage because I was expecting a strong southwesterly than night. And Caleta Partida could block some of the seas. The strategy worked and we had a pretty comfortable night. The next day, we motored along Espiritu Santo, ducking into anchorages just to explore. We dropped the anchor for lunch at Ensenada Ballena, and then continued south. Expecting another strong southwesterly, and not wanting to return to La Paz just yet, we anchored at Ensenda Balandra on the Baja pennisula, hoping to protect ourselves a bit from the wind and seas. The strategy kind of worked. We were able to explore the bay by dinghy and have a BBQ dinner before the winds kicked up. But they howled all night and well into the next day. The seas weren’t too lumpy. But it was another boisterous night.

Because the winds were still howling, we waited until late morning to pick up anchor and motor into La Paz. The channel was pretty quiet and we had an uneventful docking in Marina de la Paz. We walked into town that evening so Steve could see La Paz. It was dead at first but after we had dinner and started back, the people started coming out along the malecon.

That was the end of Steve’s vacation. The next day, although very hot, he had to help me start getting the boat ready for hurricane season. We took the jib down and folded it. Steve hauled water to the boat and filled up the water tank. And we pickled the watermaker, which would have been easier if a critical valve had worked. As it was, we had to bypass the valve to get the water properly circulating for the pickling, which is necessary when you leave the boat for an extended period of time. We had one final dinner at a nearby restaurant and then Steve headed home the next morning.

That’s when I had to get serious about decommissioning the boat for the summer. I worked solidly for the next six days on a long list of projects. It seems a shame to work so hard for so many years and months to get the boat ready to go, only to undue that work to leave the boat for part of the summer. I had to take most of the solar panels down, which gave me blisters on my hands. I had to soak and coil all the lines, removing the ones that I could. I removed lots of deck hardware that might disappear while the boat is unattended. I emptied most of the jerry jugs of diesel into the tank so the tank would have less of a chance of getting moisture in it. I gave away my gasoline supply so it wouldn’t be on board. I deflated the dinghy, covered it and lashed it to the deck. I lashed the mainsail on the boom so it wouldn’t provide windage in a hurricane. I cleaned out the stern lockers and had a local worker clean the outside of the boat. Then I covered the boat with sun shades, which will be taken down if a hurricane does show up. I also covered lots of antennas and other plastic parts with aluminum foil.

Next I had to tackle the interior. I defrosted the refrigerator and freezer and turned them off. I gave away any food that people would want and threw away the rest. That was heart breaking because I had collected all kinds of food items for cooking, much of it in San Diego, and I won’t be able to replace them. I hadn’t been expecting to do such a purge but more experienced cruiser friends clued me into the possibility of attracting critters. And while I was doing my purge, I did indeed find some critters, so I became convinced that nothing could remain on the boat.

I also cleaned the rest of the boat interior and got all the laundry done. Aldabra should have looked ship shape by then, But my next step was to take everything that I usually store outside or in the lazarettes and put those things inside: the solar panels, the jerry jugs, the bins of parts and supplies. So the boat interior looks like a junk yard.  This was necessary for a possible storm, but also because I’m having work done to the boat while I’m away, and they need access to the lazarettes. 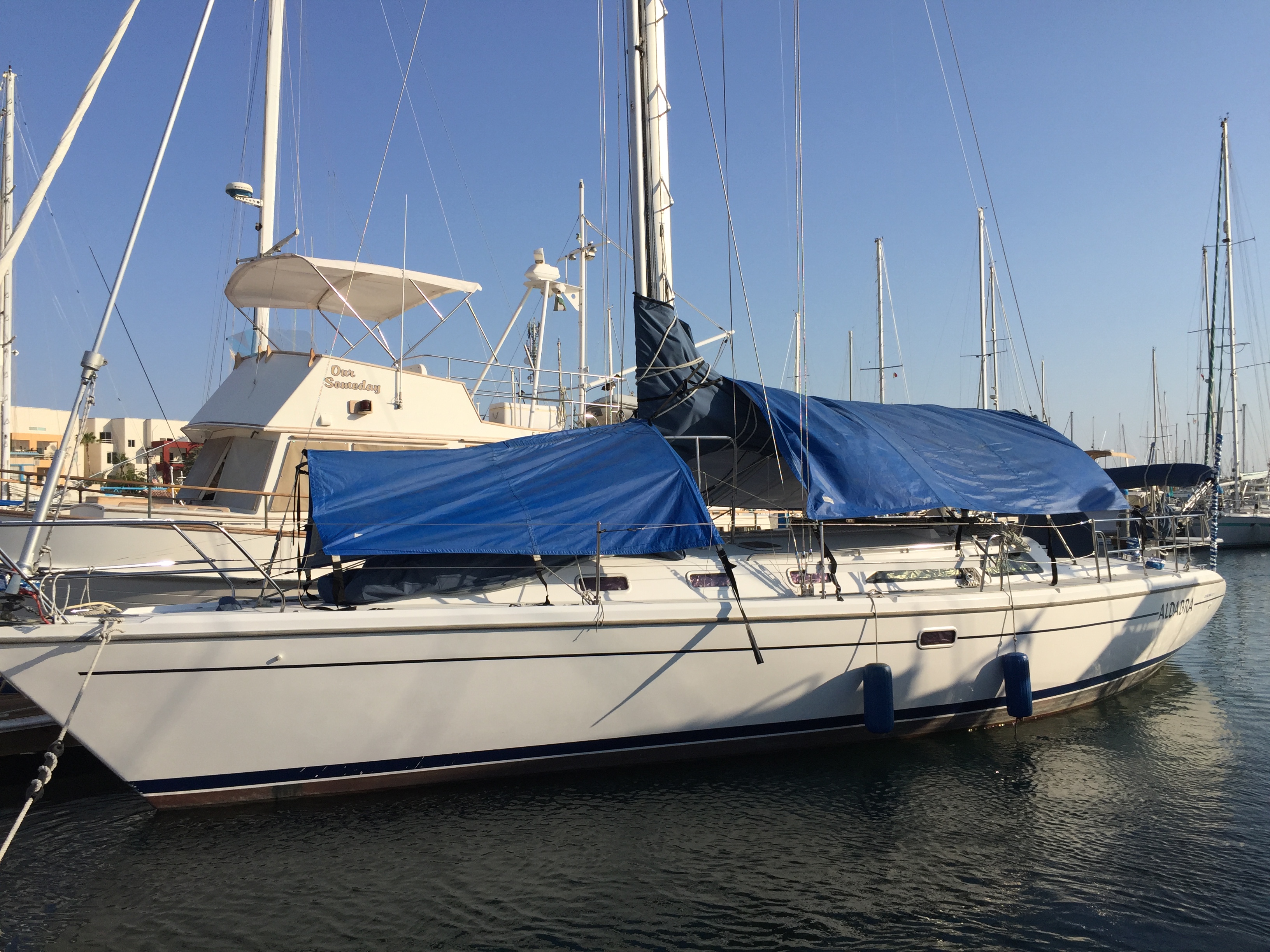 Aldabra put away in Marina de La Paz for summer

My last week in La Paz was not all work. John and Julie from Myla came in a day after I did and were a couple of boats away on the dock. In addition to giving me lots of advice on securing the boat, they invited me for several cocktail hours and dinners. We had great fun as practically the only two inhabited cruising boats in the marina.

So that’s a wrap for Aldabra for a bit. I left her under the care of a boat manager and flew to Puerto Vallarta on June 24. Tomorrow, June 26, I’m joining Jeff and Jules from El Gato for a road trip to Guadalajara, Cuernavaca and then on to Taxco. I’ll be living in a house in Taxco for six weeks with Jeff and Jules and Rick and Cindy, while we all attend Spanish immersion classes at the university.

Around Tahiti and Moorea