Cruising Around the Sea of Cortez

After two weeks in San Diego, celebrating weddings and birthdays and being with family, I arrived back in La Paz on May 17. Dinner that night was with Jane and Jerry of Aeolian who had just put their boat on a ship bound for Victoria, Canada. It was a bittersweet dinner because we had shared a lot of our Mexico cruising experience, and now they were departing. I knew I would miss them.

I spent the next two days cleaning the boat and was ready for my new crew, who arrived on May 19. We went to the market for provisions that day and took off the next. After stopping for fuel at the Costabaja dock, we headed north, back into the heart of the Sea of Cortez.

My goal for this next trip was to get to some places I hadn’t yet seen and connect with other friends for brief visits and subsequent farewells. The first visit was with Kemo Sabe on the first night out. We found them in a beautiful, small, quiet cove on Isla Espiritu Santo. Sometimes finding cruising friends isn’t easy because our cell phones and radios aren’t always in range. But we were lucky to find Jan and Alan in El Mezteño. They came over to Aldabra for happy hour and we caught up on our travels since we’d seen each other several weeks before. This was another sad farewell because they were returning to La Paz and then Jan would fly back while Alan and friends sailed or motored Kemo Sabe back to San Diego. Two more people that were integral to my Mexico cruising experience, and they too were departing. 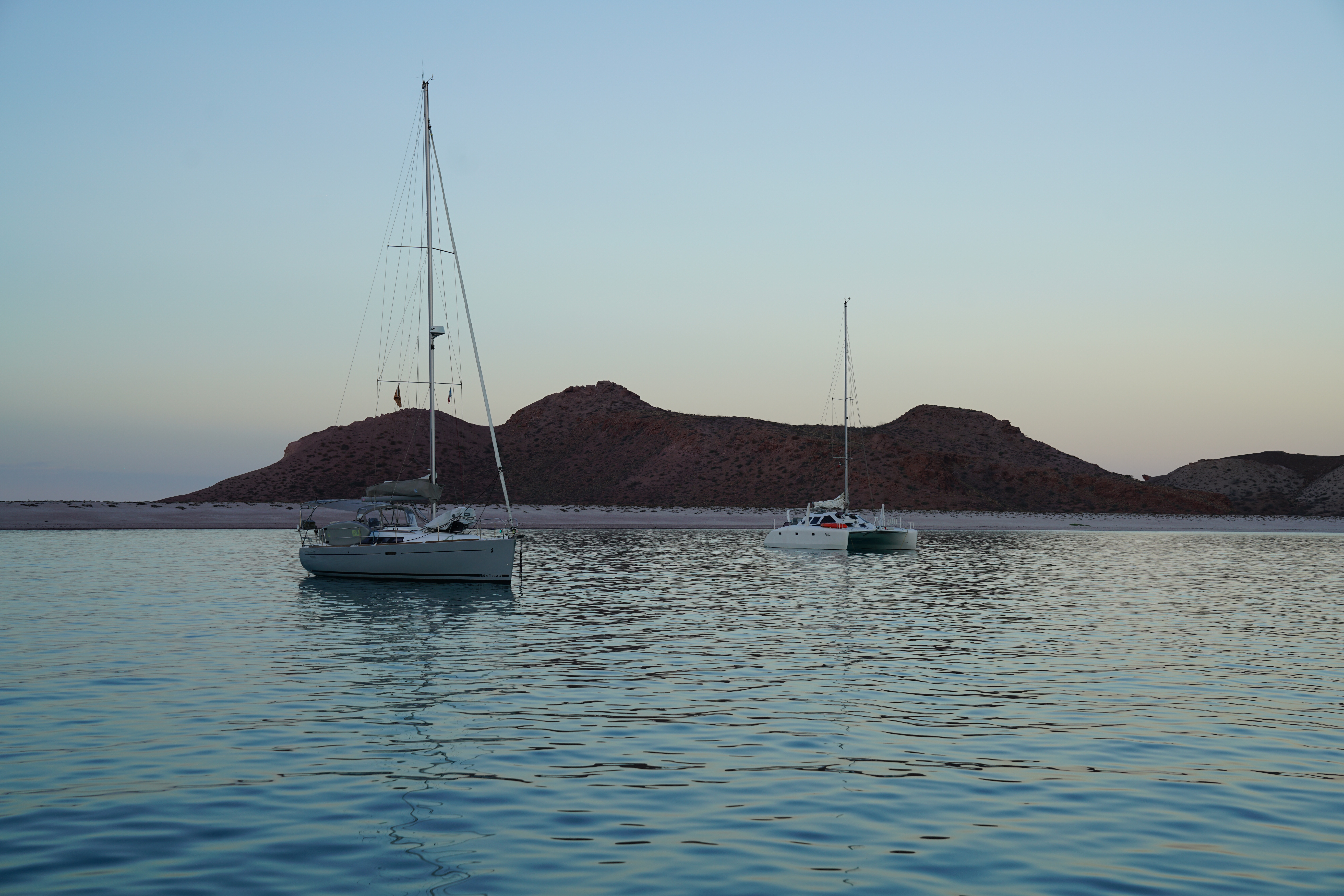 Coaster and Epic at anchor near Aldabra at Isla San Francisco

While Jan and Alan stayed in El Mezteño for another night, we headed north, stopping first at Isla San Francisco. I wasn’t planning on lingering, even though Isla San Francisco is stunning and offers much in the way of hiking and snorkeling. I’d been here multiple times before and I had more places to see in a short time. So we didn’t put the dinghy in the water, which prevented us from visiting with friends on Epic and Coaster, who were also in the anchorage. I swam over to each boat for brief chats, but we were off again the next day, heading north.

The next stop was lovely. Puerto Los Gatos, on the eastern side of Baja, is a small, beautiful anchorage with its colorful rock formations and a couple of good reefs for snorkeling. I could easily have stayed there for days, but this time it could just be an overnight stop, so again we didn’t put the dinghy in the water to explore on shore. But I did get to snorkel on the reef. And a man named Jimmy brought us lobster and scallops and fish fillets. Dinner was quite a treat that night.

Leaving Puerto Los Gatos, we were headed to another bay on the eastern side of Baja, Agua Verde, which was about 18 miles north. But we learned on the radio net that morning that Liahona and El Gato might both be in Los Candeleros, another 18 miles northwest along the coast. I wanted to see both of them, so we motored past Agua Verde and anchored in Los Candeleros. El Gato hosted both Liahona and Aldabra for happy hour that night. The visit seemed way too short with not enough time to really catch up. But Liahona was able to return my wetsuit to me. And I was able to deliver a package to El Gato that I had brought from San Diego.

Liahona took off the next day, and I thought I might see them as we moved north. But as it turns out, we were on different tracks and I won’t see them again until next year. I have been able to listen to their progress on the morning radio net, and they are already in San Carlos, ready to haul the boat out for the summer.

We stayed in Los Candeleros and Don and Anne on Redwood Coast II sailed down to join us. I was able to deliver a package to them from Don’s sister in Calfornia. And Anne and Jules and I kayaked to shore and went to the small tienda in the nearby village. That night all three boats had diner on Aldabra, with more farewells. El Gato would head out the next morning and it would be the last I would see of them until we meet up in Nuevo Vallarta at the end of June. Don and Anne and I went for a nice hike the next morning in Candeleros, but I then had to say goodbye to them. It has been such a gift to be cruising with these two. We left Santa Cruz about 3 months apart, and we’ve traveled at different paces while in Mexico. But we’ve been able to share many anchorages and have been in touch at all times. They’ve supported me in countless ways. I don’t like to think of them not being here. But they are now headed back to La Paz and then on around to the west coast and back to Santa Cruz. 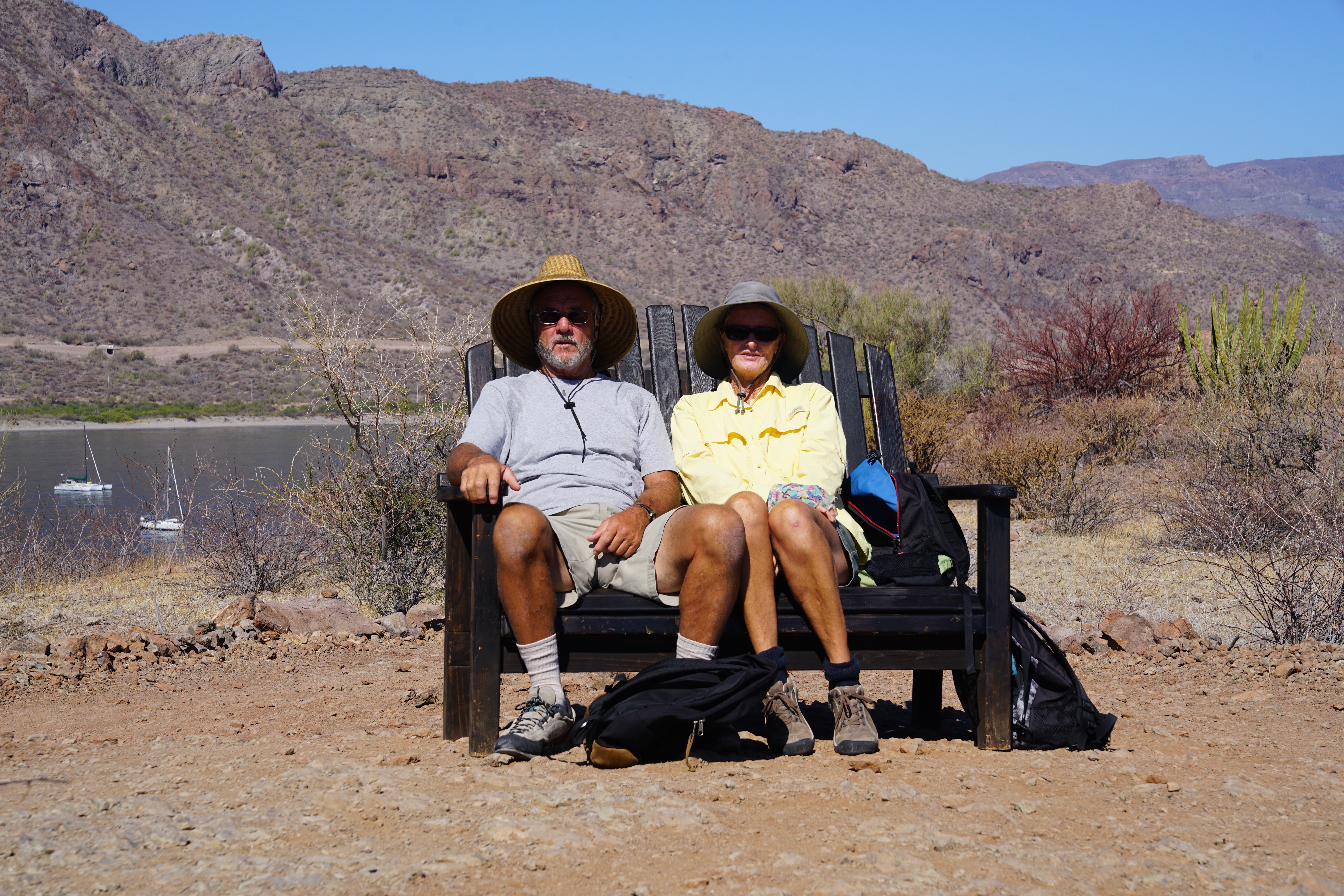 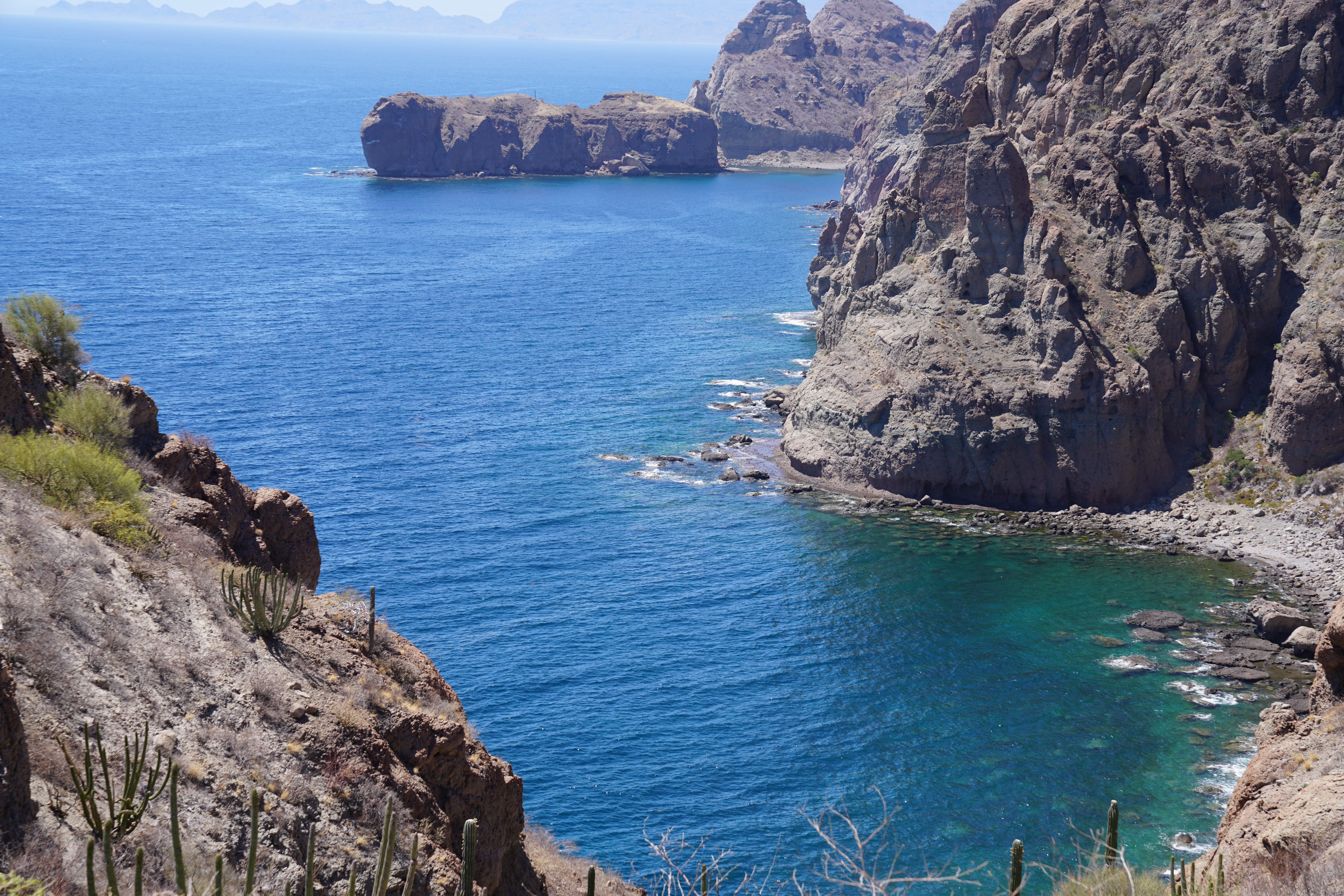 Looking down the other site of the point from Candeleros. Very nice hike.

The wind was up that afternoon after the hike, and I wanted to take advantage of the first good sailing opportunity we’d had since leaving La Paz. So we took off and kept sailing past planned anchorages, and ended up in Puerto Ballandra. We stayed two nights and explored the bay, both on land and in the water. I think I saw a big horned sheep high on a mountain ridge.

From there, we headed west nine miles over to Loreto. We anchored in front of the town, put the dinghy in the water, and went ashore for lunch and reprovisioning. After returning from the market, we hauled the anchor back up and motored north six miles to Isla Coronados. This is yet another gorgeous desert island in this vast Mexican sea of varying shades of green and blue waters. Many people stay for several days off this island. It has lots of hiking and walks and good spots for snorkeling and diving. We didn’t take advantage of it as much as we could have. We circumnavigated in the dinghy and saw lots of interesting rock formations and dive spots. But in the end we snorkeled only in one spot near the boat, with lots of rays. And we just took one flat walk on land. Swarms of bees around the boat were a bit of an irritation. And the winds indicated that it was time to move on after a couple of days. 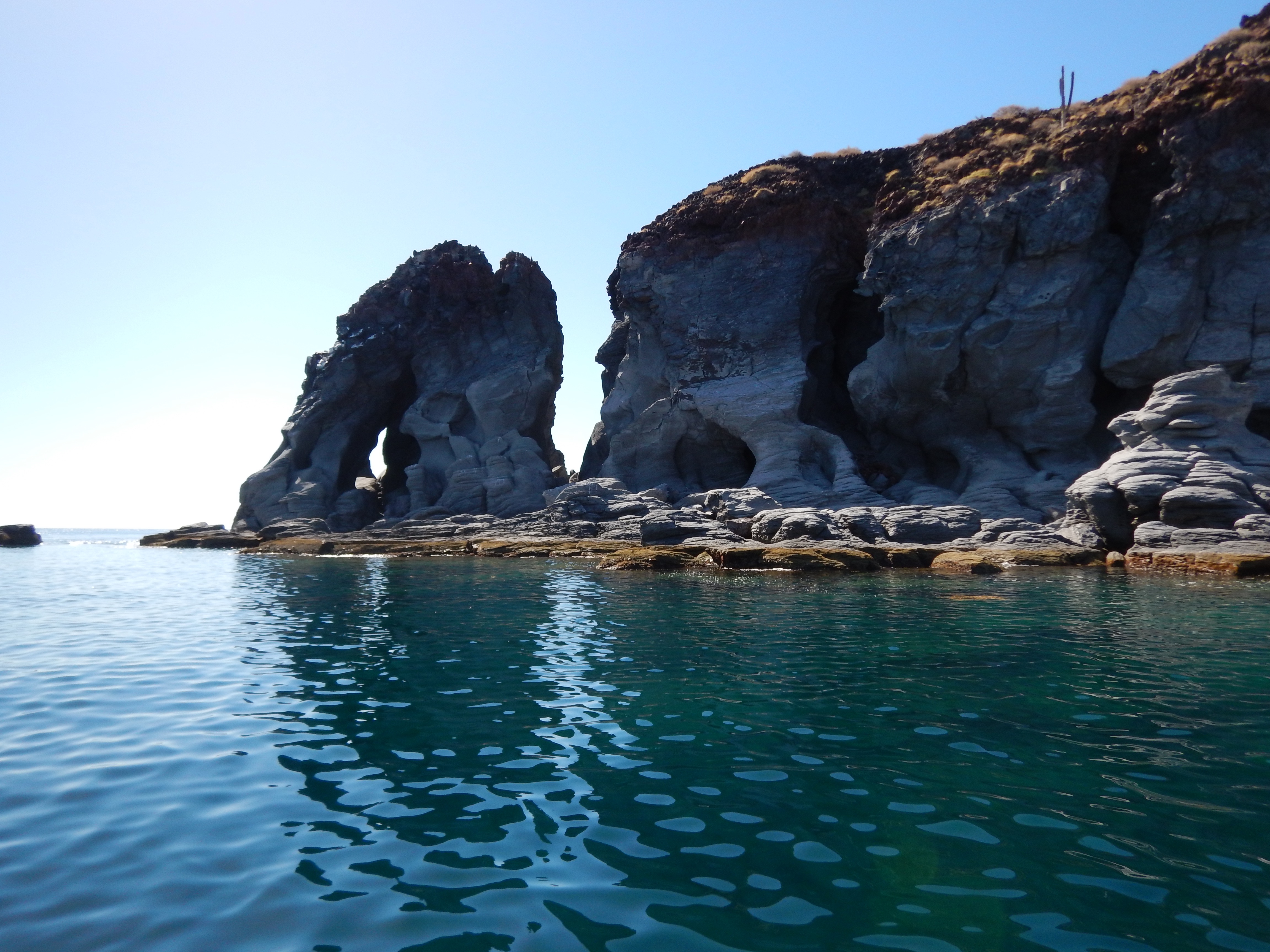 The rocks around Isla Coronados 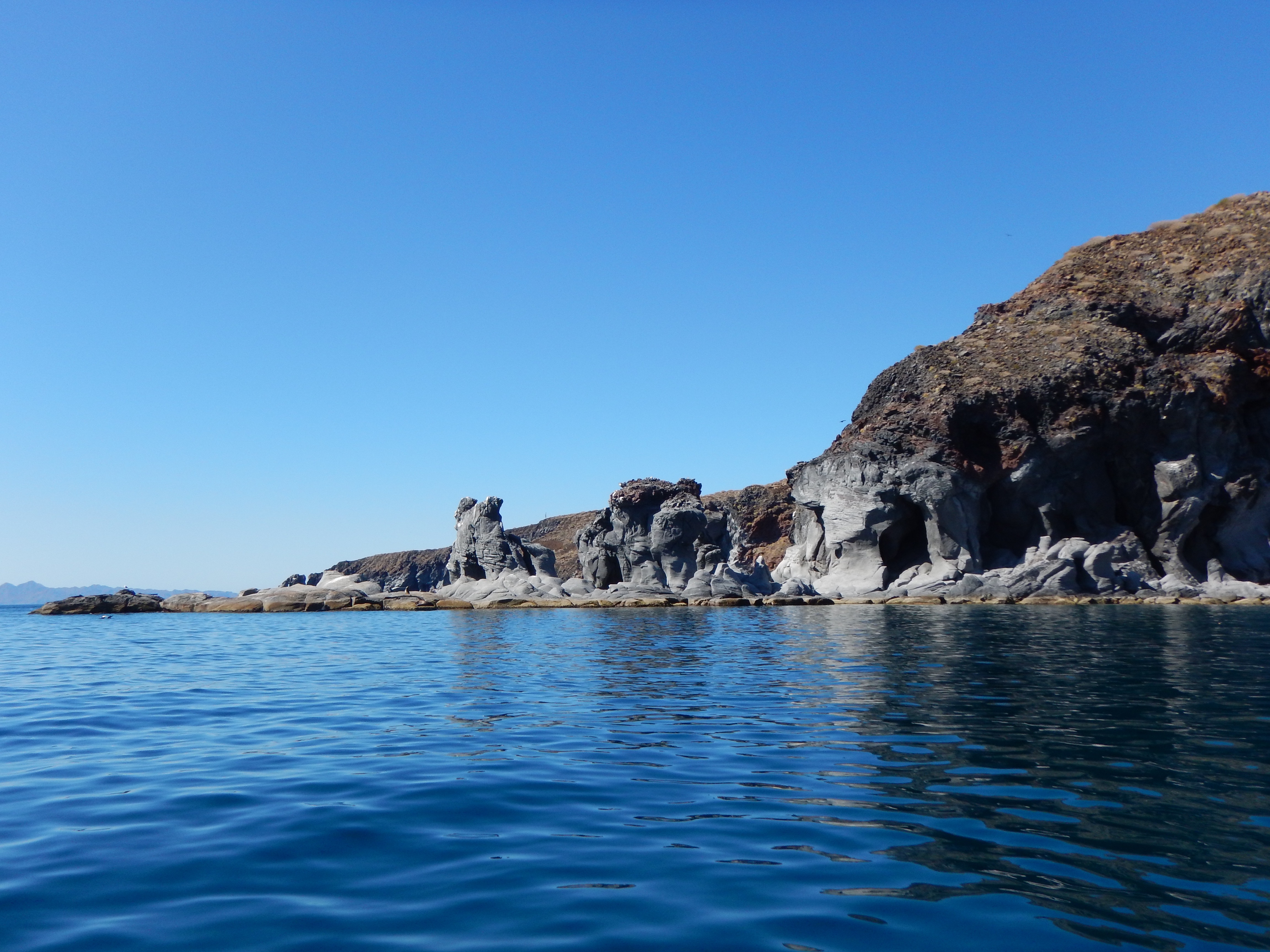 More of motoring around Isla Coronados

I had been told that San Juanico, 18 miles north on the west coast of Baja, was a favorite spot. And I wanted to check it out. The problem is that we chose the wrong time to visit. As soon as we got there, the winds blew hard from the east, and brought huge seas that traveled over long distances to this bay, which was unprotected from the east. We sat there uncomfortably at anchor all afternoon and into the evening. Then shortly before sunset, we followed the only other boat around the point to the north, to La Ramada, a north-facing cove with flat seas and relatively calm winds. That night we did have strong south-westerlies howling through the anchorage, but at least the seas weren’t huge.

The next day, we hiked over the hill, back to San Juanico to explore by land, but we never had the right conditions to experience this beautiful anchorage as many of our fellow cruisers have. We also took the opportunity to snorkel a bit off the northwest point of La Ramada. And we joined other boats, Jollydogs and Our Affair on another boat called Wet Bar, for happy hour. The wind howled again from the southwest that night. The next day, most of us left La Ramada. Jollydogs and Our Affair headed north. And Aldabra started heading back south. It was the one day when winds were predicted to come from behind us, and I wanted to take advantage of that. So we sailed and bit and mostly motored to Puerto Escondido, which is 14 miles south of Loreto. 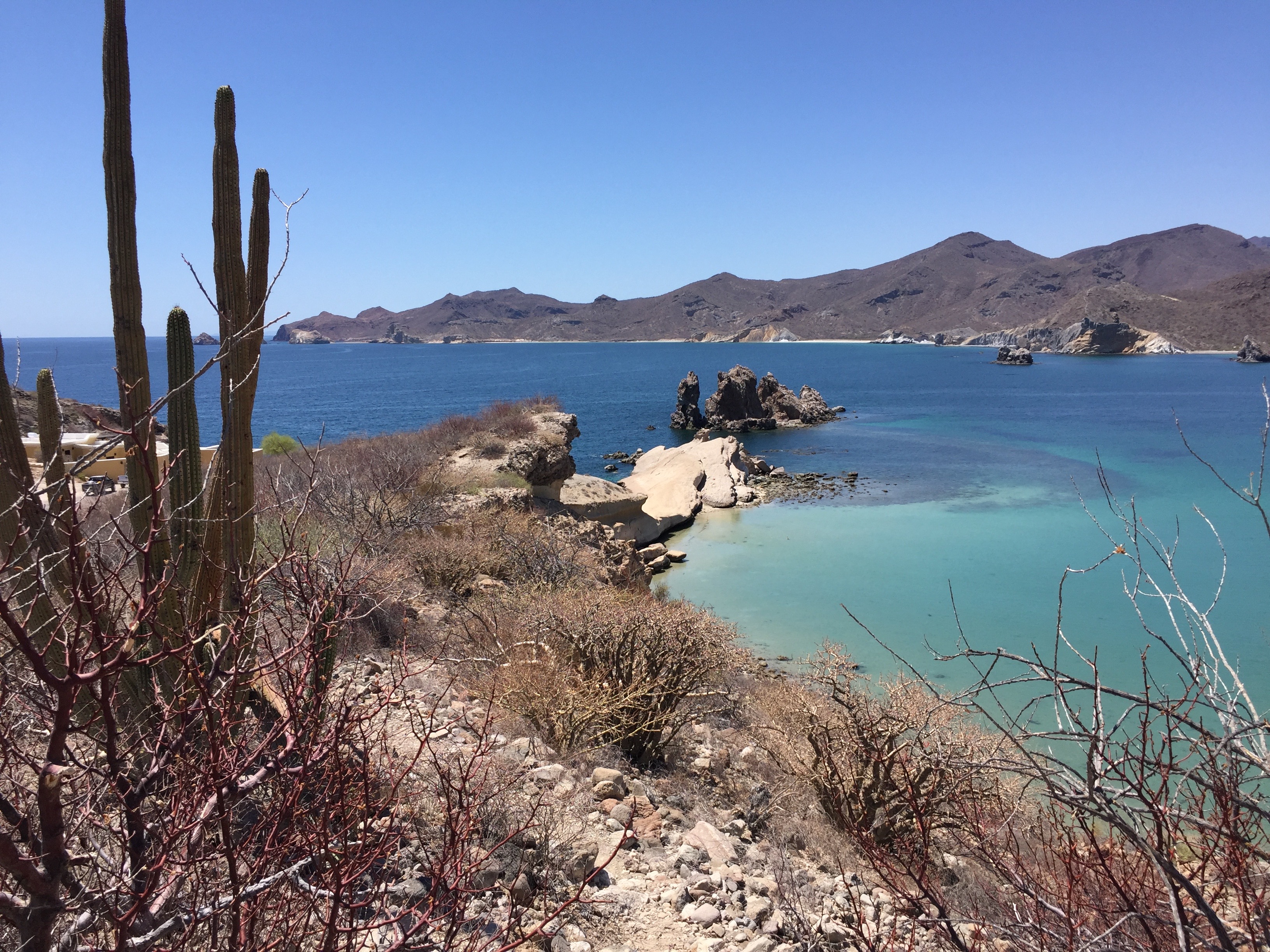 Looking down at Caleta San Juanico 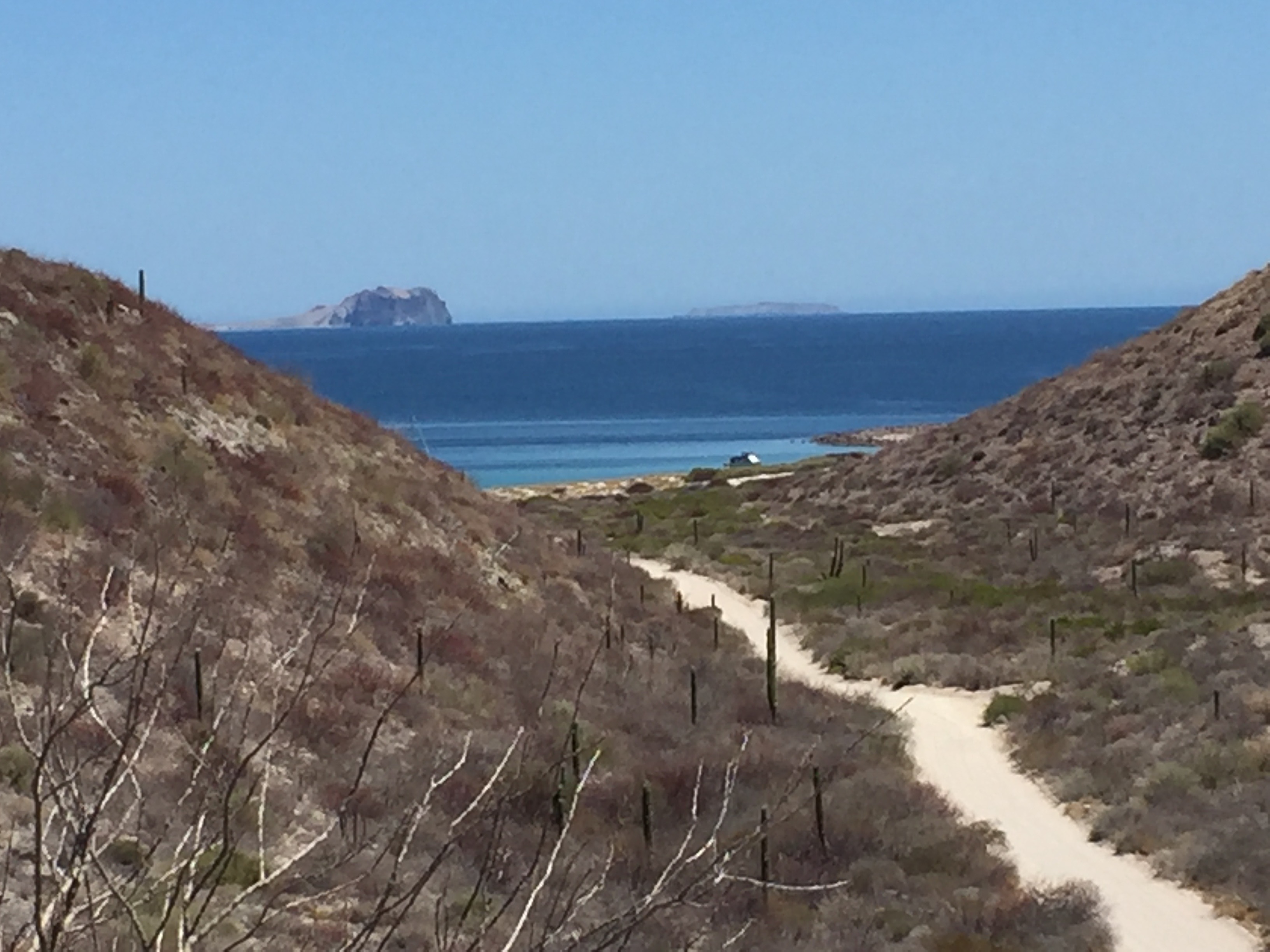 Walking over the saddle from San Juanico to La Ramada 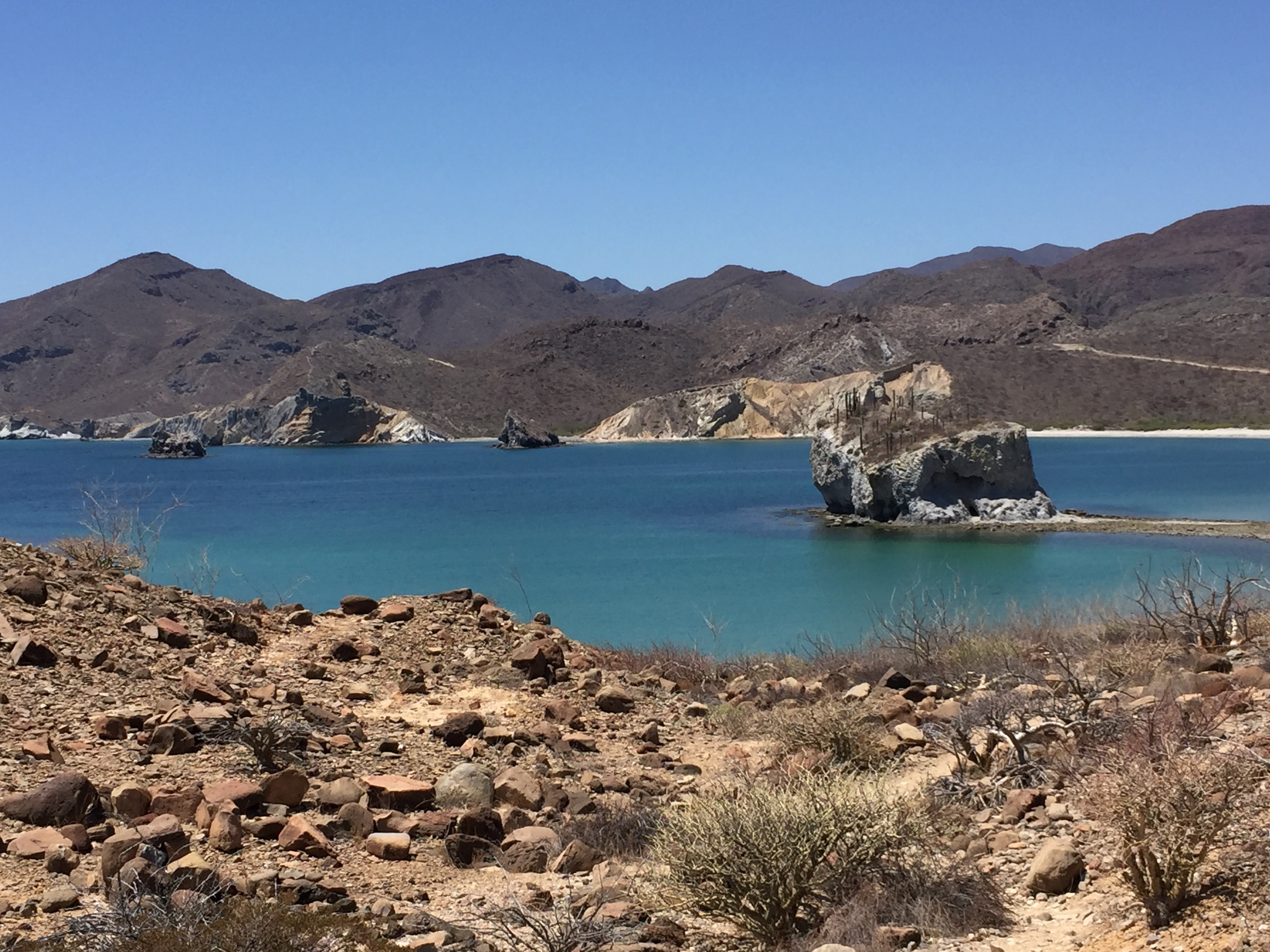 Another view of San Juanico 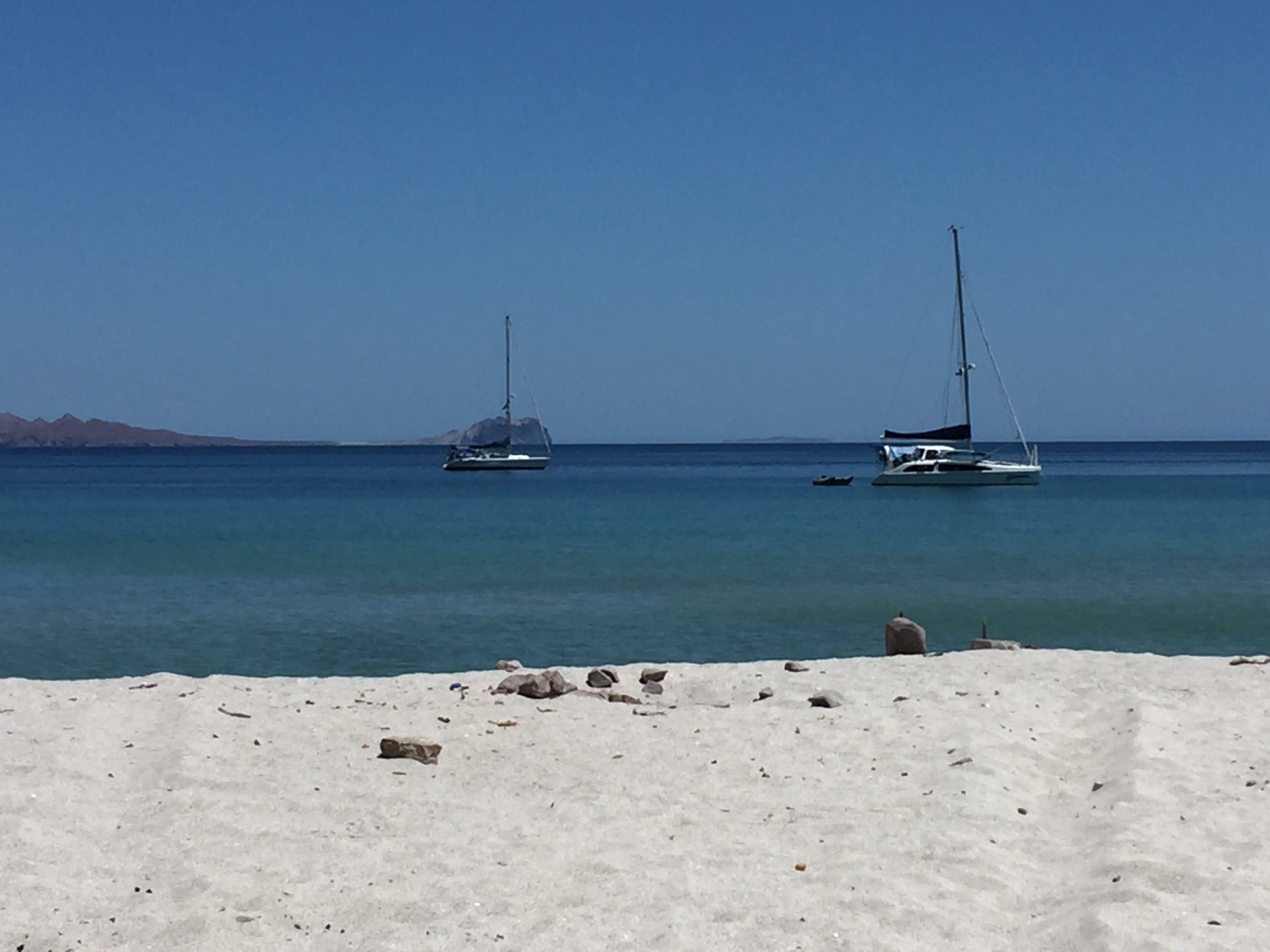 Aldabra and Jollydogs at anchor in La Ramada

We arrived in Puerto Escondido in time for me to check into the marina to pay for the mooring ball I would use for the next few days inside the harbor. My crew left and took a taxi to Loreto. And I began to take advantage of having the boat to myself for a few days. I leisurely cleaned, took advantage of the laundry, showers and Internet services and chatted with other cruisers. And I indulged in some reading. I also took at taxi into Loreto on one evening for the Chocolate Clams Festival and had a great evening with some other cruisers, from boats Myla, Mystic Eyes, Interlude, Milagro, Trovita, Gypsea and Easy.

As I am posting this blog, I’m now waiting for my crew for the final cruising segment of the season. Steve Hardt, a long-time friend of my sister, who shares my interest in sailing, will arrive in Loreto and take a taxi here to Puerto Escondido. We’ll then take the boat back to La Paz, hopefully by way of a few places I haven’t visited. It of course all depends on the wind.

As I contemplate returning south to La Paz, I’m thinking about all the places I didn’t get to this year in the Sea of Cortez. I barely surveyed the middle section and didn’t even get close to the northern section. There is much more to see, as I could tell as I flew over it earlier in May. On one side you have this vast, desolate peninsula with huge mountains running up the center. On the other side you have dozens of desert islands of all sizes and shapes. Travel from place to place can be in short hops. Sometimes the weather is benign. Sometimes the winds and seas seem quite challenging. But this relatively unpopulated expanse is a boater’s paradise, with great swimming, fishing, hiking and people.