La Paz to Puerto Escondido and Back

Before leaving La Paz, I began rereading the Log Book from the Sea of Cortez, by John Steinbeck and Doc Ricketts. It was my companion reader as we moved about many of the same places they visited to collect specimens. Aldabra left La Paz on April 15 at about 11:00 a.m. and headed north after stopping for fuel at the fuel dock at the Costabaja marina. Crew Matt had joined the boat that morning less than an hour before departure. But we had been getting to know him for a couple of days before that, as he joined us for dinners out with other boats.

We were bound for either Caleta Partida, the anchorage between Isla Partida and Isla Espiritu Santo, or Ensenada Grande, an anchorage on Isla Partida. We caught a small Bonito on the way and released it.  I had been to Caleta Partida before arriving in La Paz, and as we passed by, it didn’t look that attractive for the expected wind conditions. So we continued on to Ensenada Grande. When we arrived, we found Redwood Coast II and Kemo Sabe already anchored there. They were just about to have happy hour together on Redwood Coast II, so we happily accepted an invitation to join them. We hitched a ride over to Redwood Coast II on Kemo Sabe’s dinghy because we weren’t ready to launch our dinghy and put the motor on. 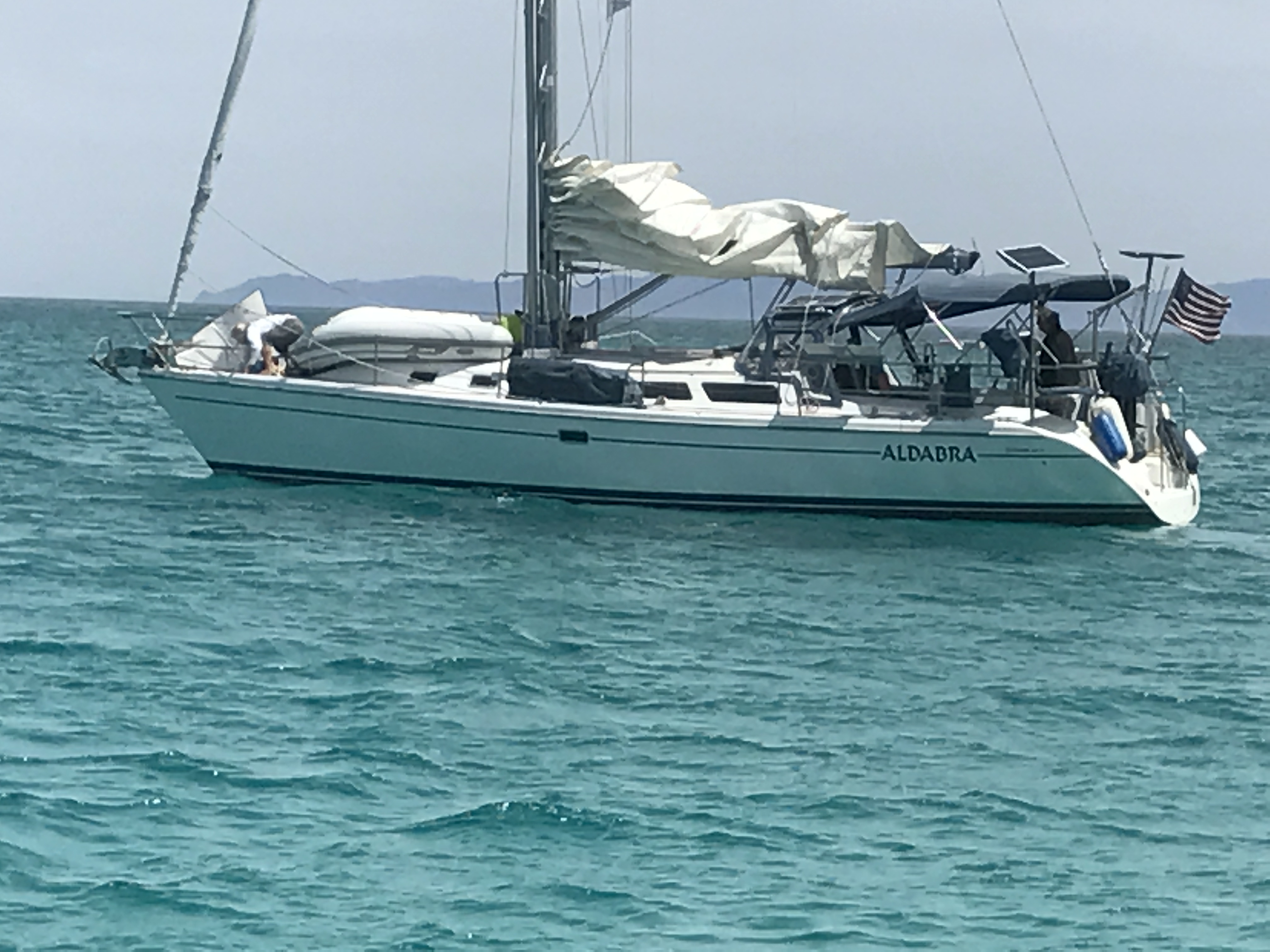 The next morning we did launch the dinghy and joined Don and Anne of Redwood Coast II on a small expedition ashore to check out a view of the anchorage achieved by scrambling over boulders up an arroyo behind a small beach. It was a bit steep as we made our own path. But the view was worth the sore knees. Next we took the dinghies over to the larger beach to check out a little private camp used by a company who brings clients over from La Paz for short stays. There was another trail behind the camp leading to the other side of the island. Don and Anne and Matt and I hiked it the next morning. It was a trail for about 5 minutes, and then for the next hour or so it was bouldering. The view on the other side was stunning, but my knees were shot by the time we climbed down and returned to our dinghies. 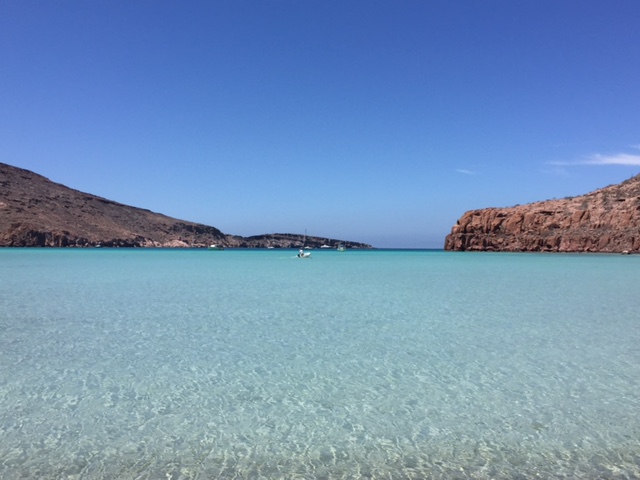 Looking from the beach in Ensenada Grande 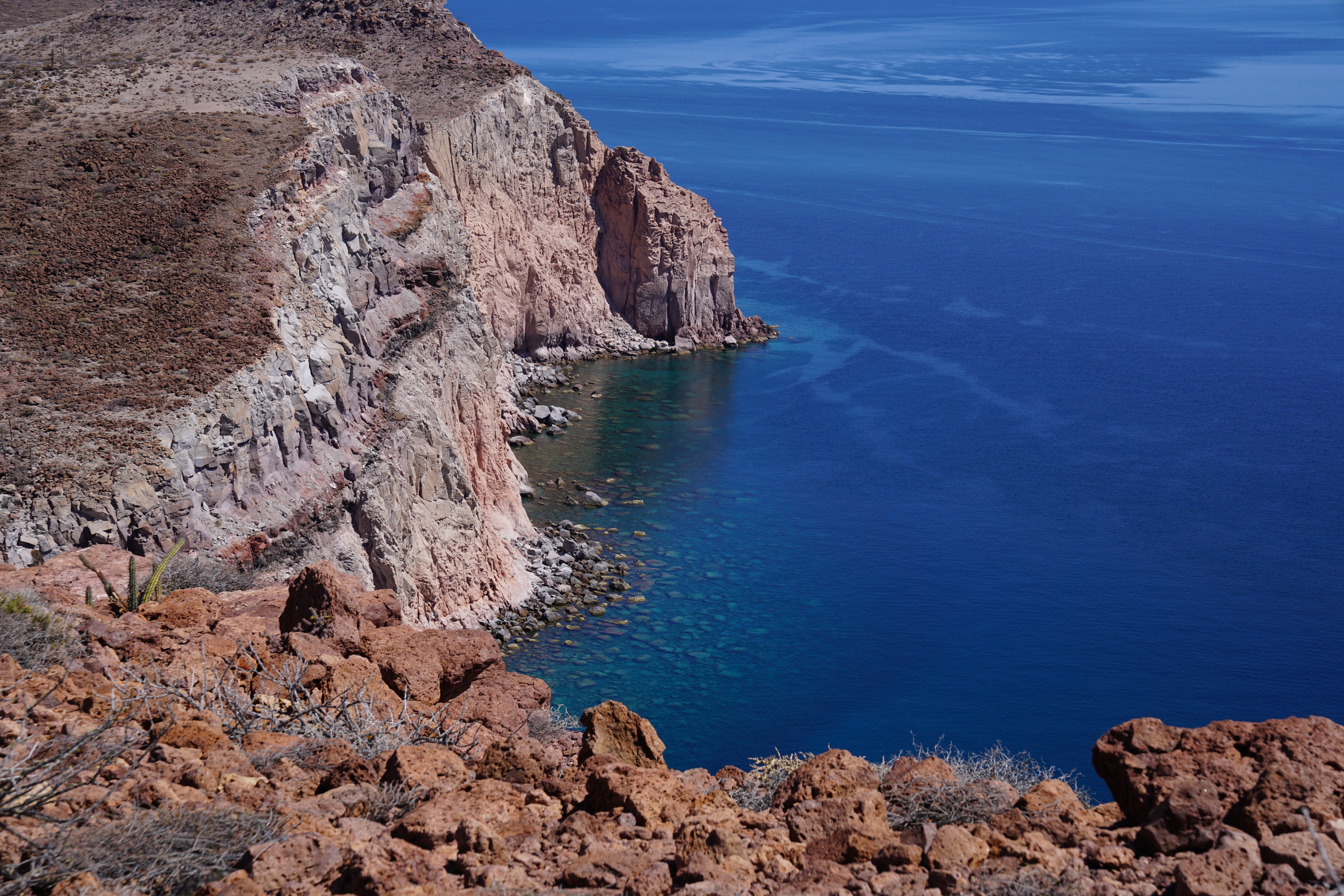 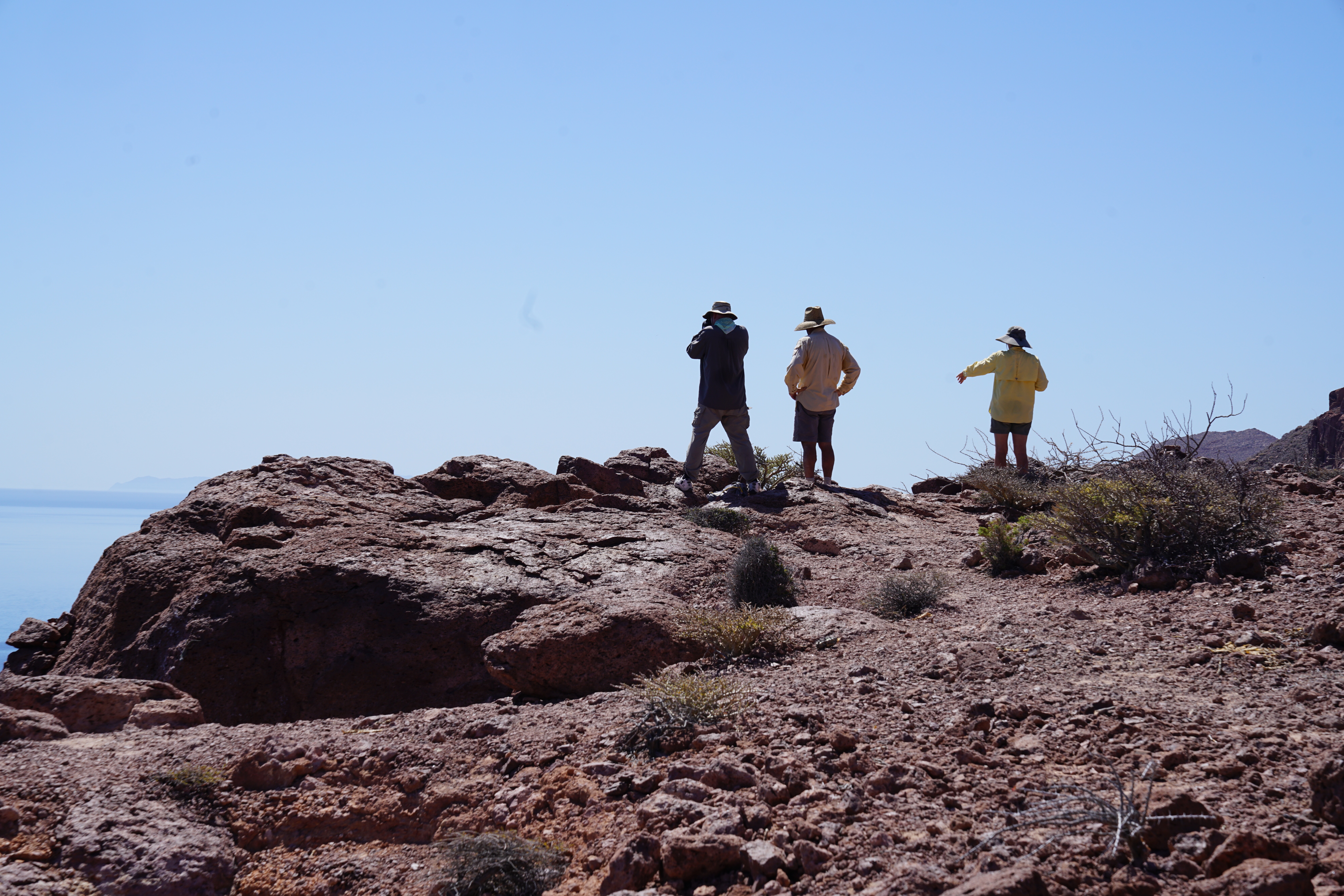 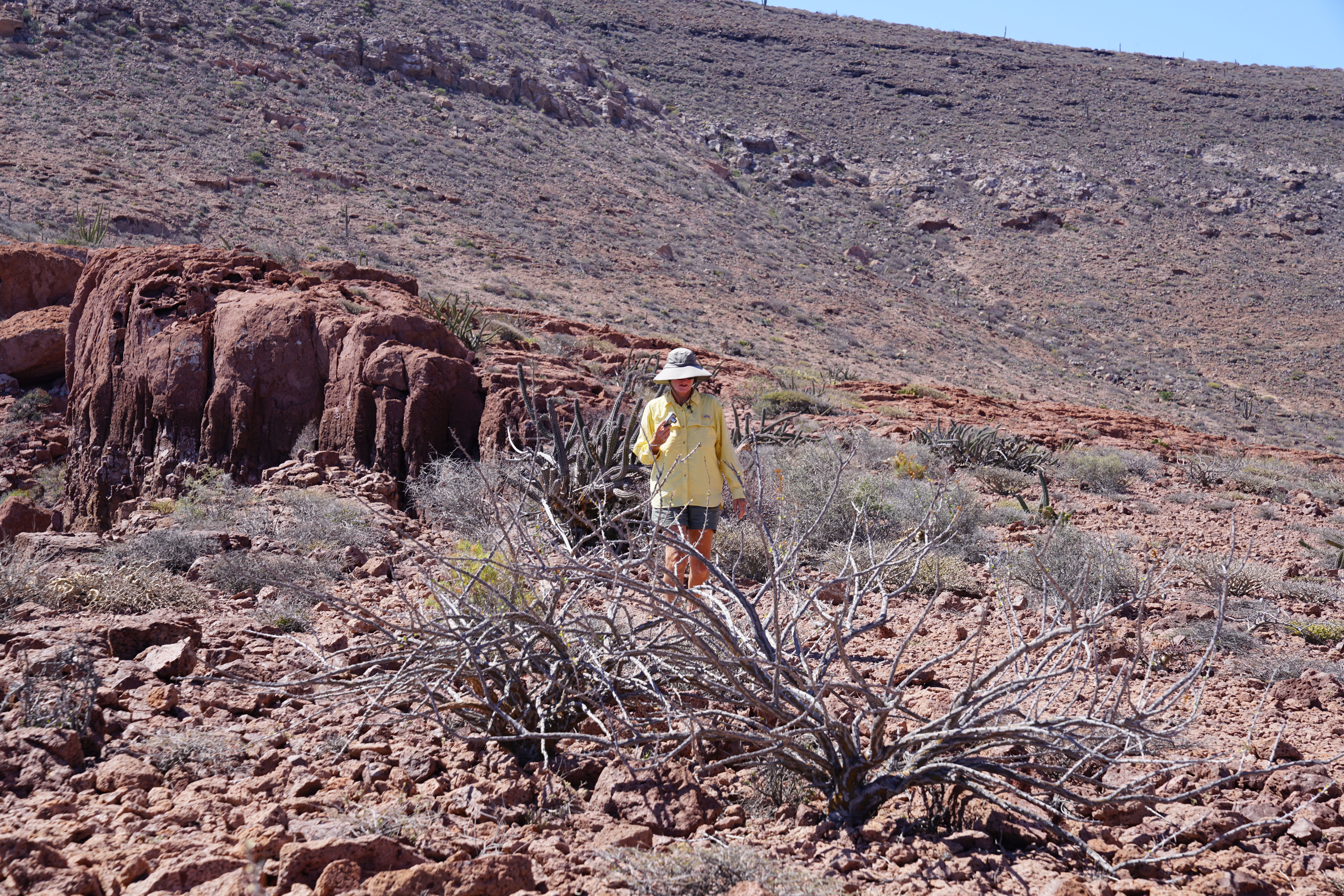 Anne exploring on the east side of Isla Partida

We left the next morning for Isla San Francisco, arriving a day after Kemo Sabe. We went over to their boat for dinner. Aeolian and El Gato both arrived in the anchorage that evening. The next day, with Jane and Jerry on Aeolian, we walked the ridge line that overlooks the anchorage. 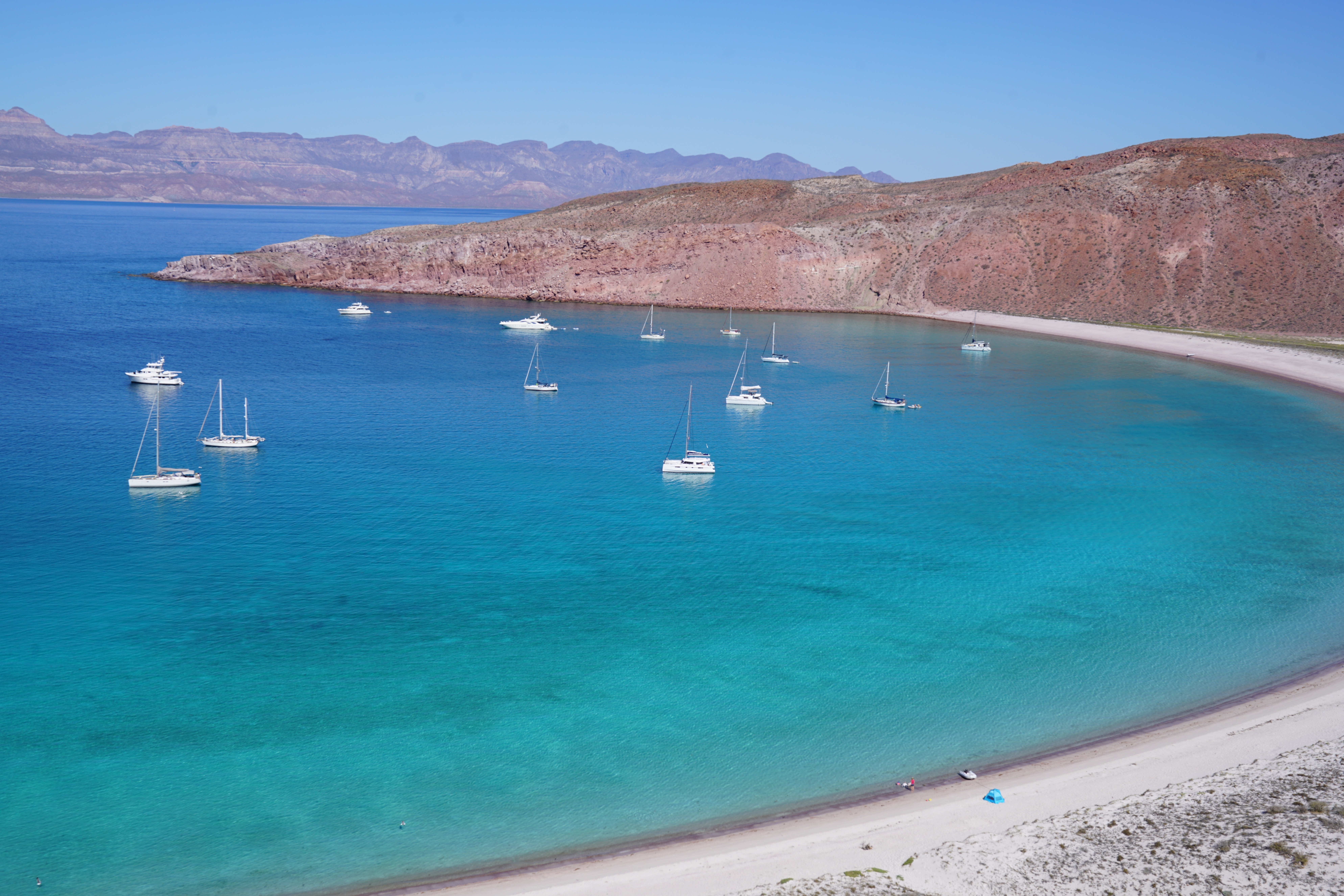 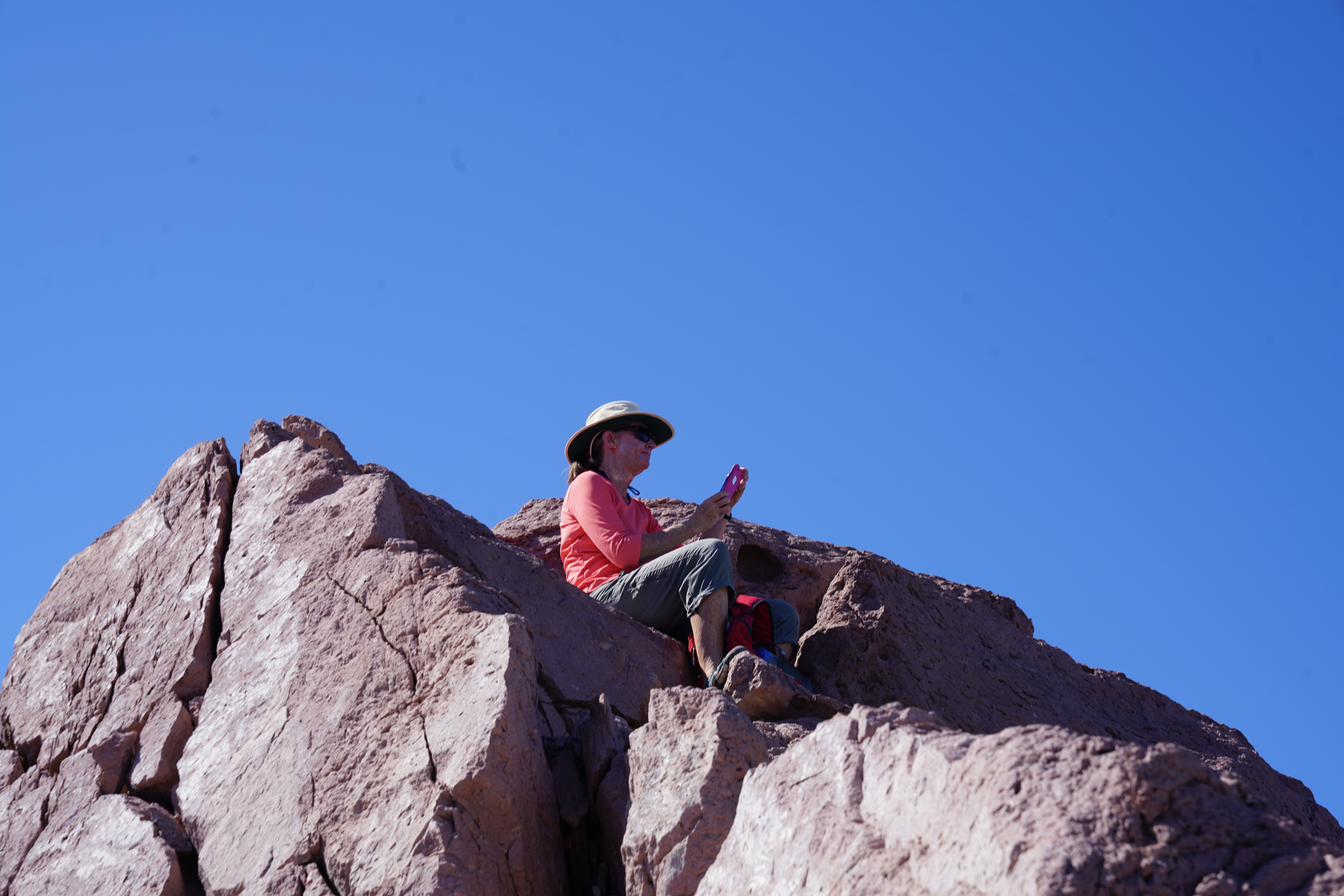 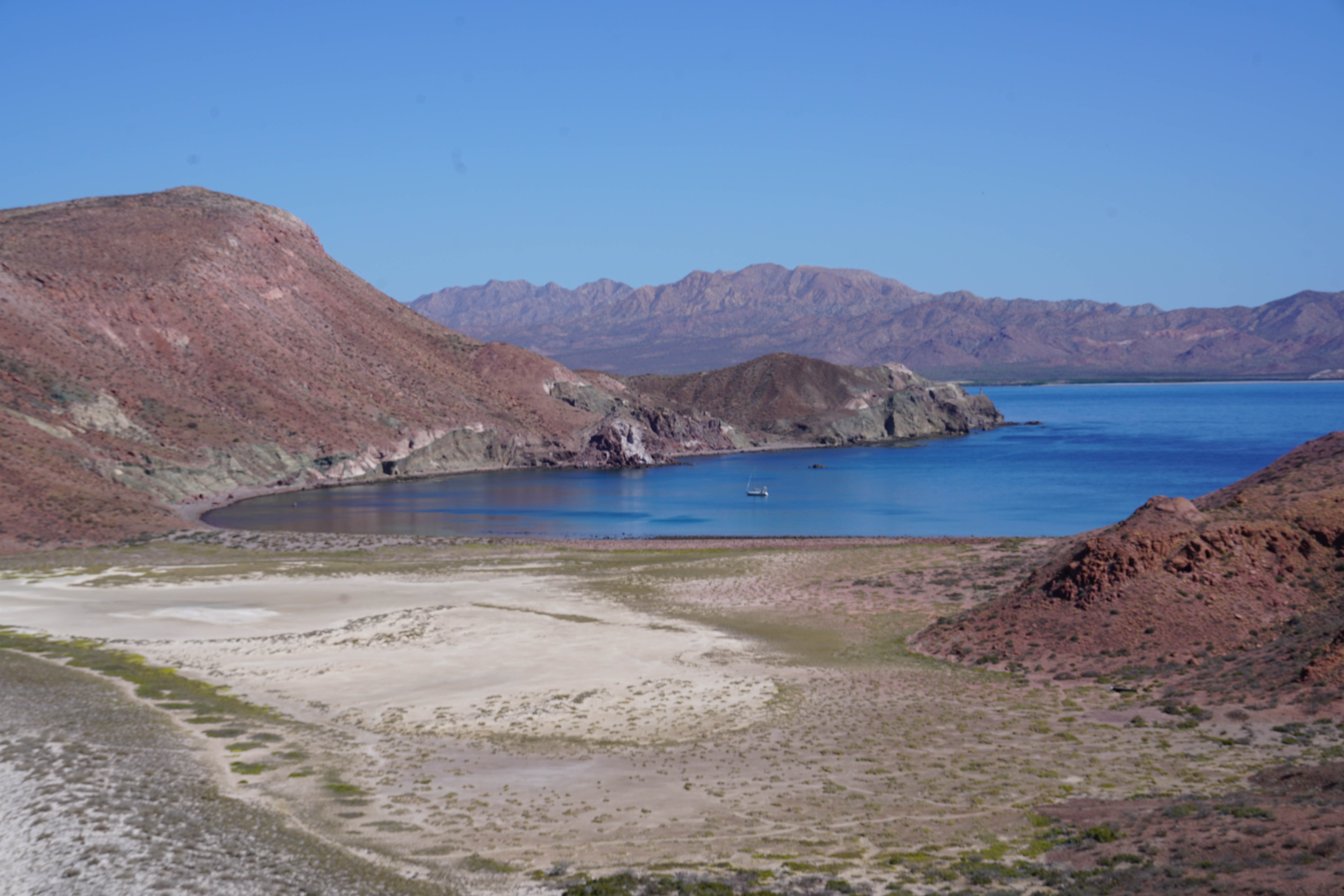 Looking over at the east side of Isla San Francisco

That night all four boats had dinner on El Gato. While we were there, a boat was trying to enter the anchorage after just losing their prop. They were trying to come in under sail with little success, so we took two dinghies out and rafted up to either side of the boat, guiding it in to a spot where it could anchor. The next day another boat towed it across the channel, presumably where it could have access to a new prop. The winds were from the northwest while we were in Isla San Francisco, with some high gusts. Matt enjoyed the free diving off the north point. We were there at the end of the second week of the easter holiday, so there were a lot of power boats with jet skis and water skis, and it was quite obnoxious.

We left with Aeolian on Friday, April 21, at 7:00 a.m., headed for Agua Verde, which was 52 miles north, up through the San Jose Channel. The winds were light, from the north/northwest. We sailed at times but mostly motor sailed. The seas were flat until we reached the top of Isla San Jose. We had larger swells after that. We arrived at Agua Verde in the late afternoon and anchored in the middle anchorage, in front of a wide beach. We stayed there for three nights and two days. The water was warmer than everywhere else. While there, we snorkeled at Solitaire Rock, which will be closed permanently around November of this year. We also hiked over the trail at the northwest anchorage and made our way to the painted cave. It was a long, confusing slog, but we made it. We also walked around the town a bit and had tacos at a new cooperative restaurant on the beach. Al and Jolinda from Chez Nous joined us there when they arrived in the anchorage. 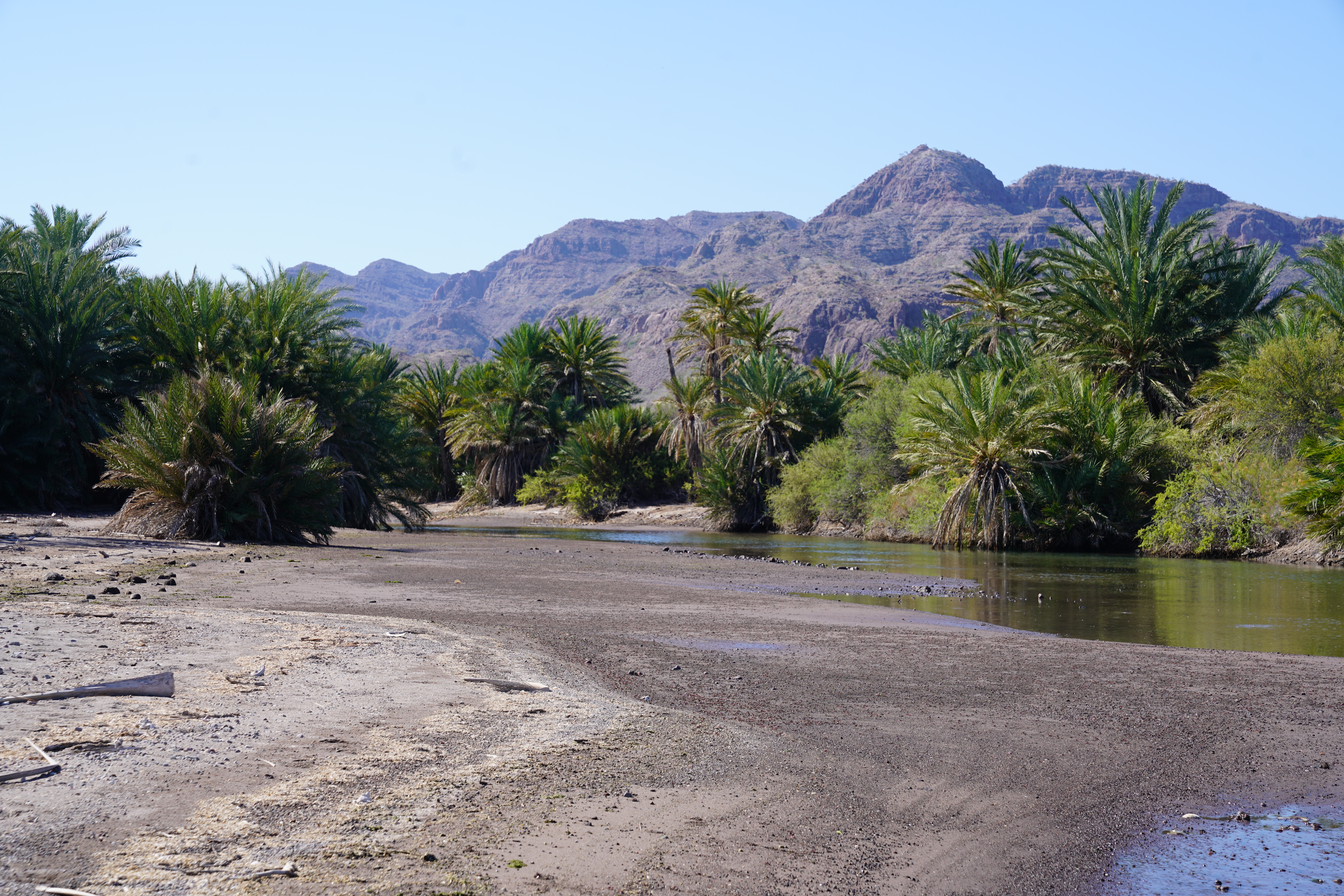 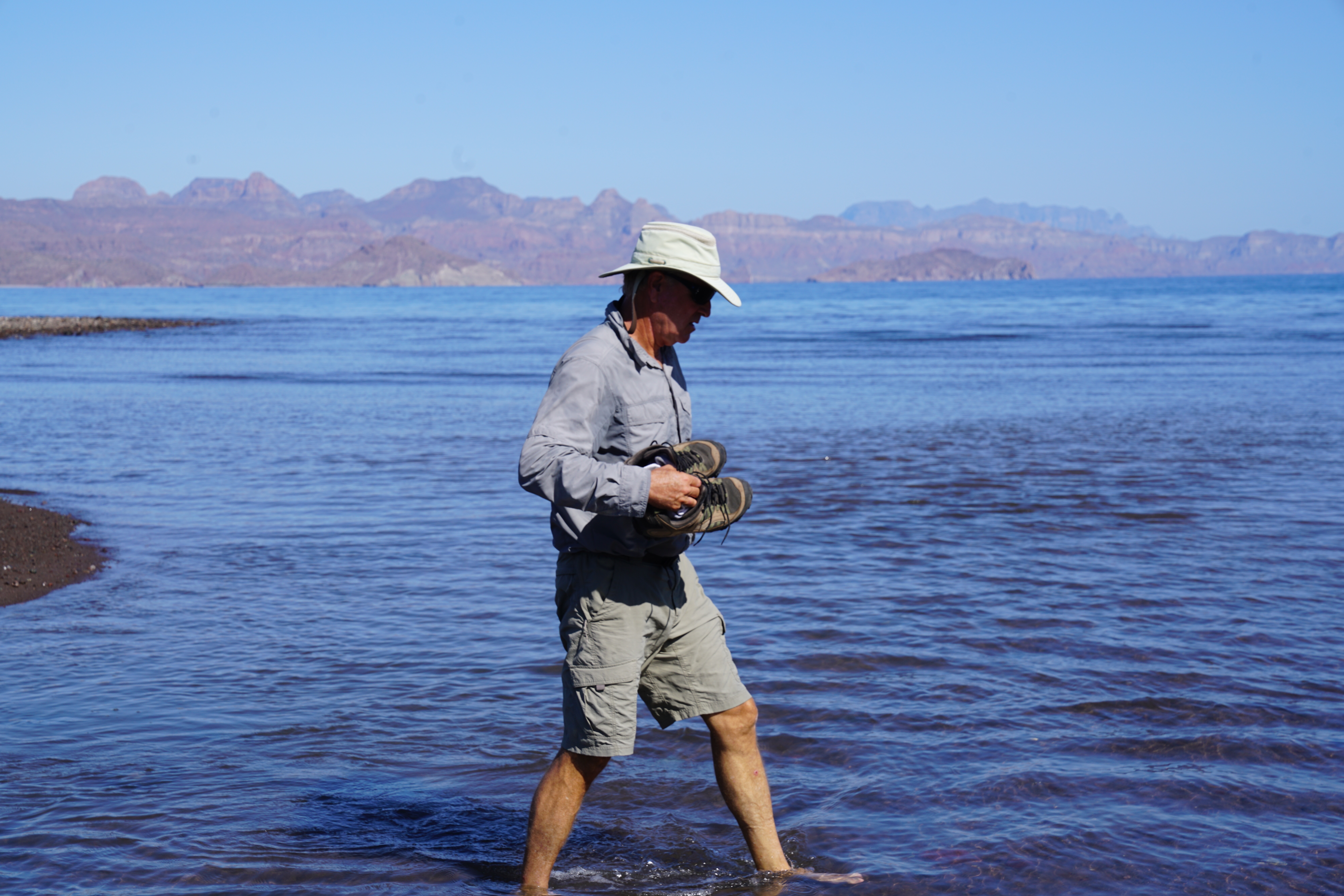 Jerry crossing the river on the hike to the painted cave 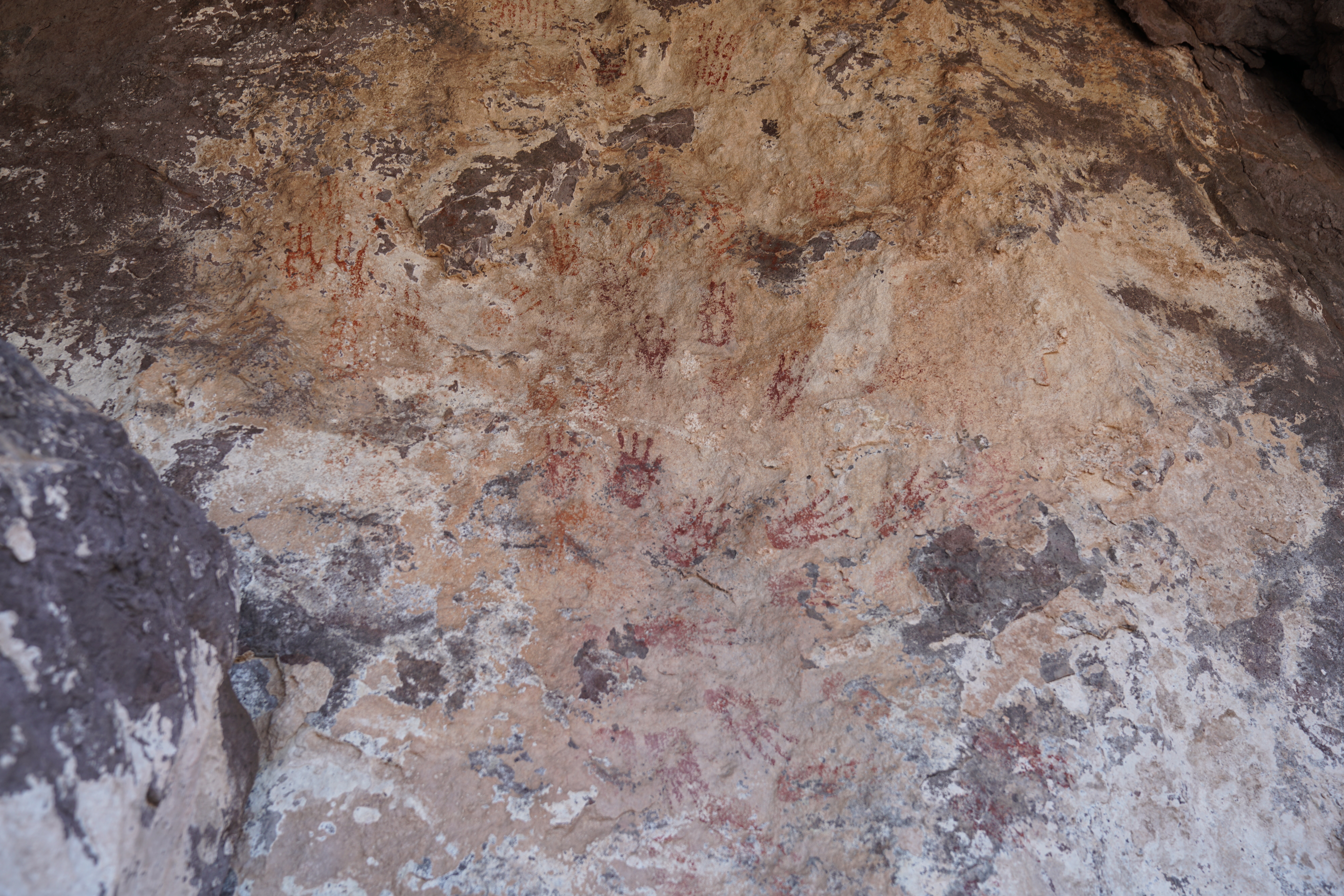 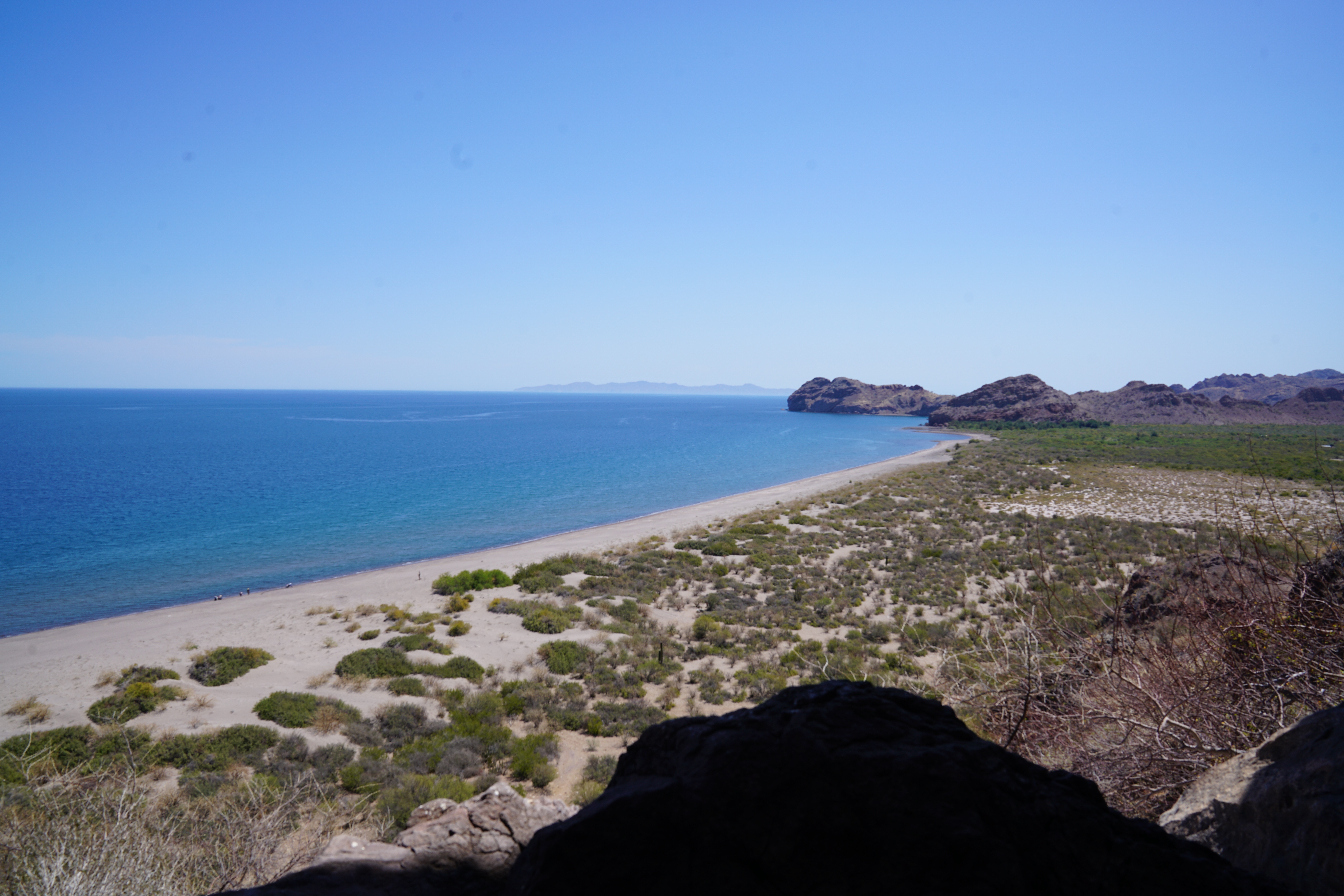 Looking out of the painted cave, back from where we came from

We continued north from Agua Verde on Monday, April 24, along with Aeolian. We motor sailed the whole way to Puerto Escondido. The winds were light from various directions until the last five miles, when the wind picked up to 22 knots south of the point. We took moorings in the inner harbor and went in Aeolian’s dinghy to check into the marina. Afterward we had beer and appetizers at the restaurant there.

The next morning we all four took a taxi into Loreto. We walked around the mission, visited the waterfront and had brunch at a restaurant overlooking the water. We were waiting to see the motorcycles and cars form the offroad race. They were due to arrive at any minute, but we finally gave up and continued walking around town. We visited the Caballo Blanco used book store, the Ferre Mar fishing supply story and the Ley grocery store, before taking the taxi back to the anchorage. That night, we had dinner with Aeolian on shore, and said our goodbyes. Aeolian was to continue north, and it was time for Aldabra to start heading south again. 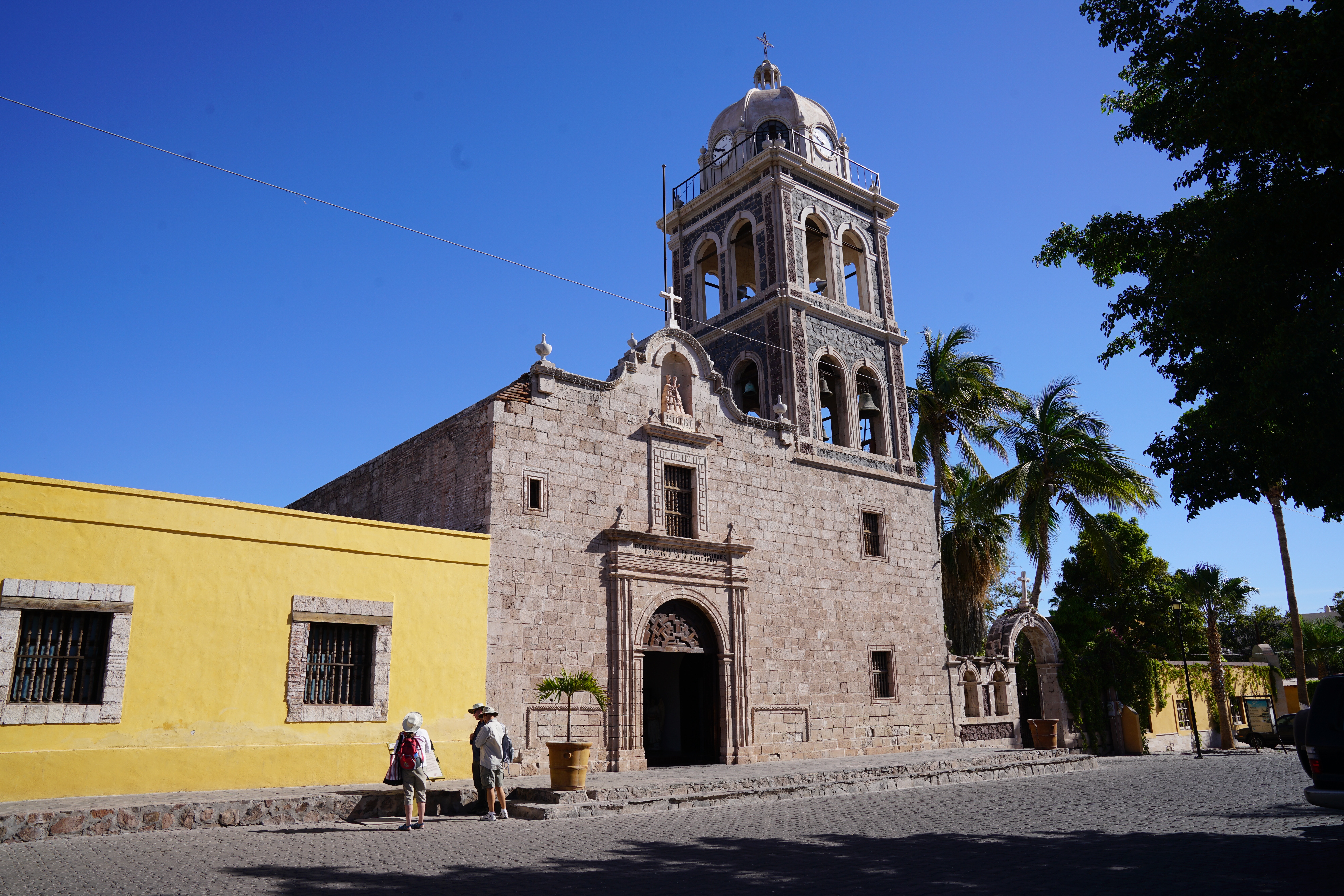 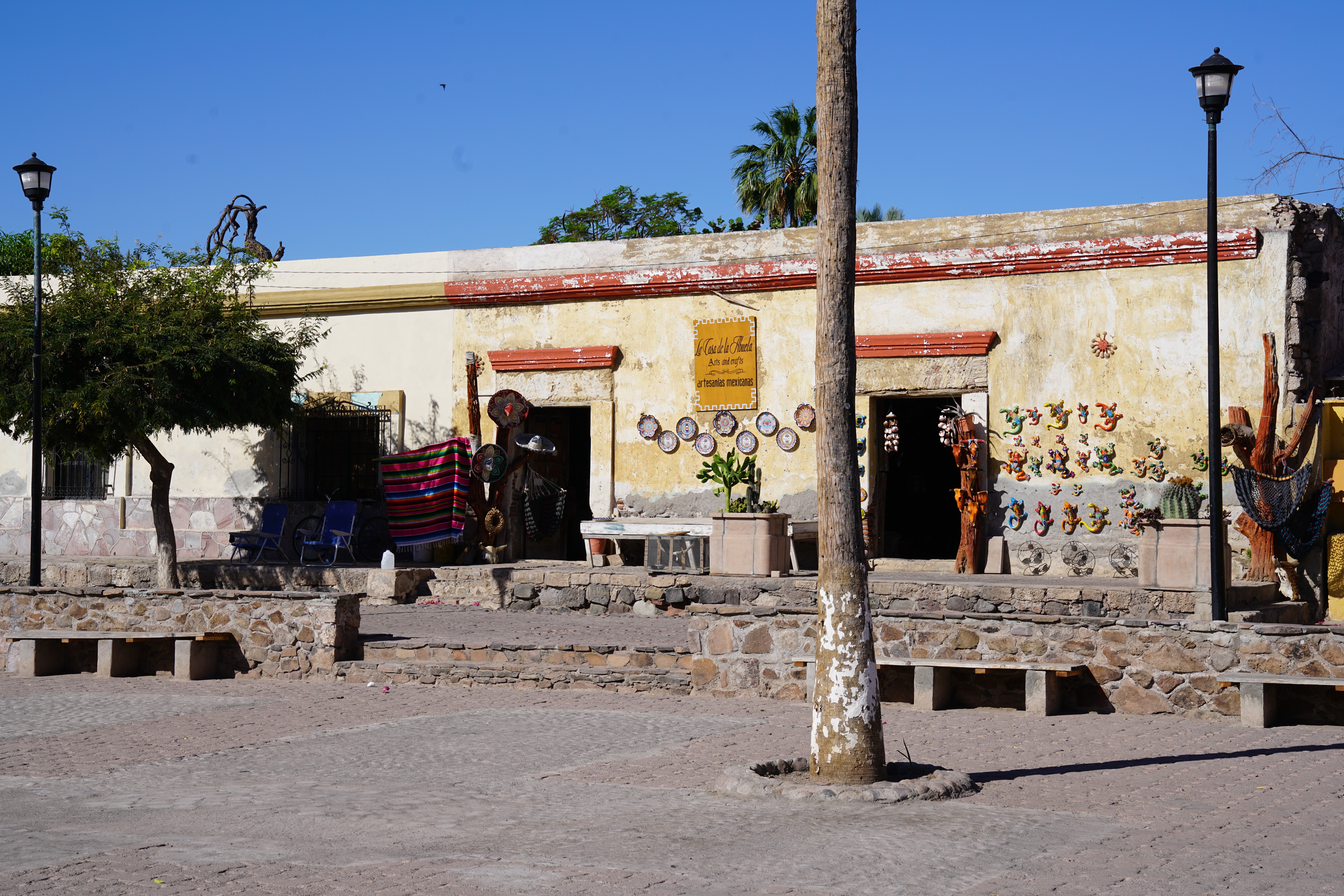 One of the old buildings next to the mission 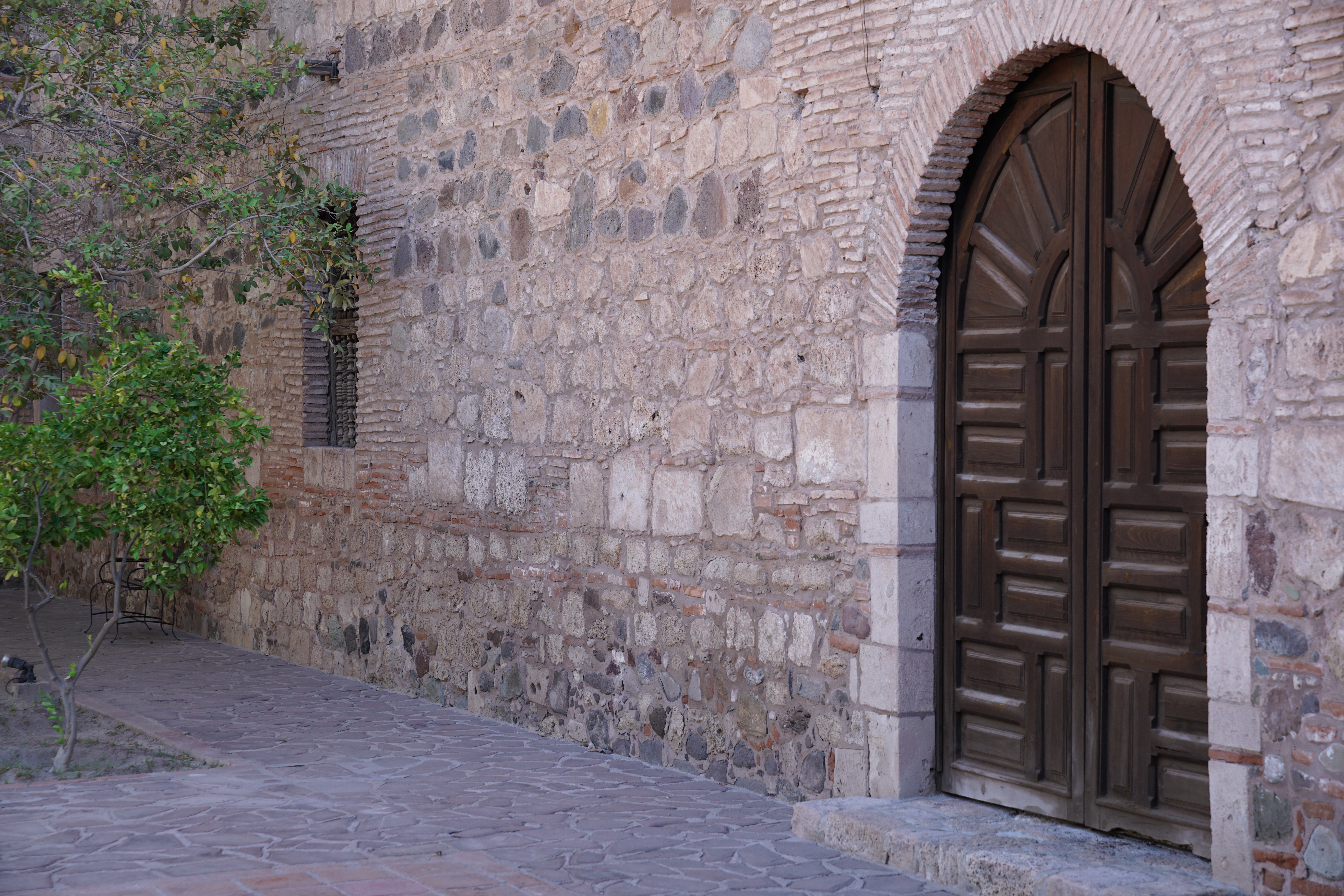 Inside the courtyard of the mission 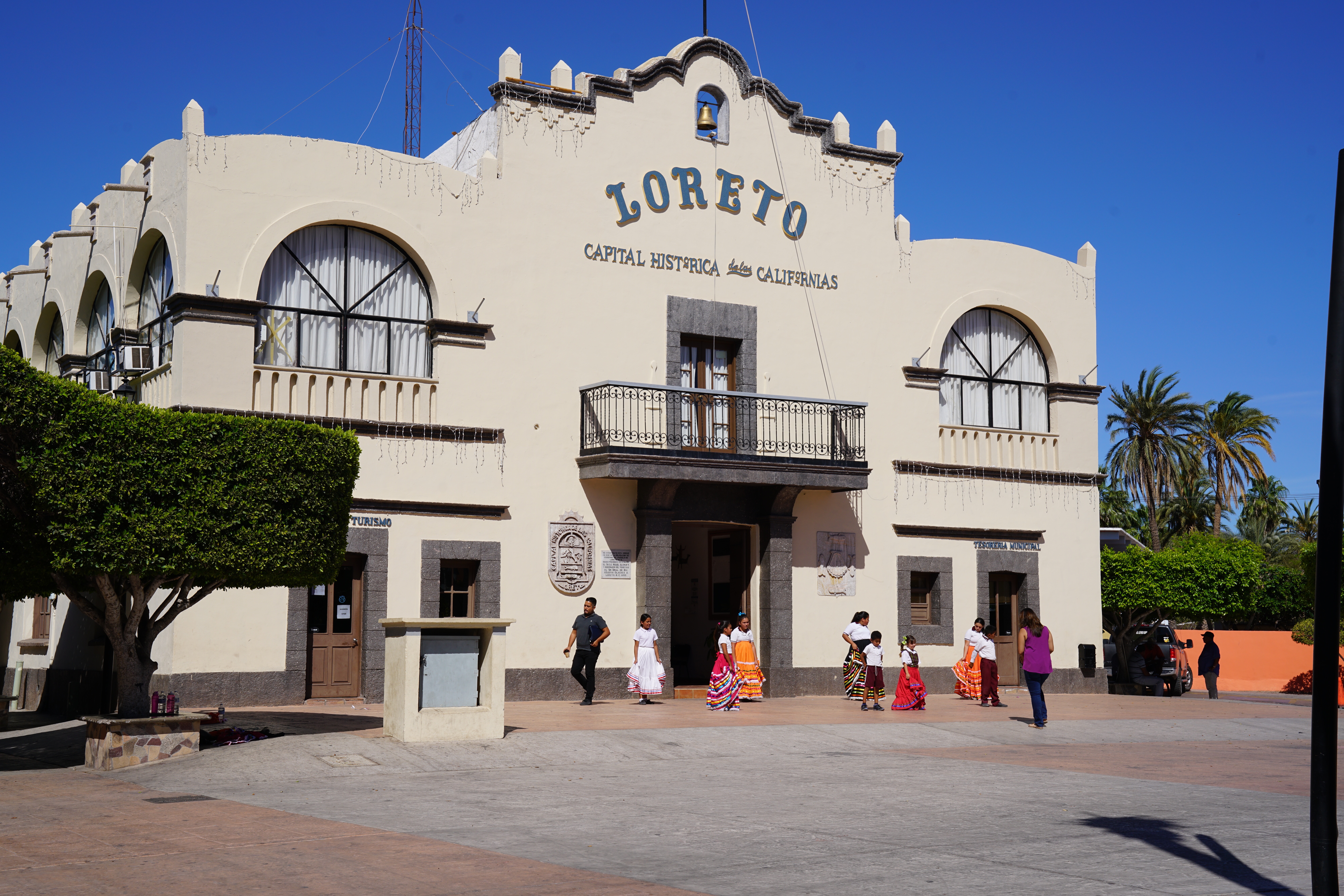 The government building in the center of Loreto 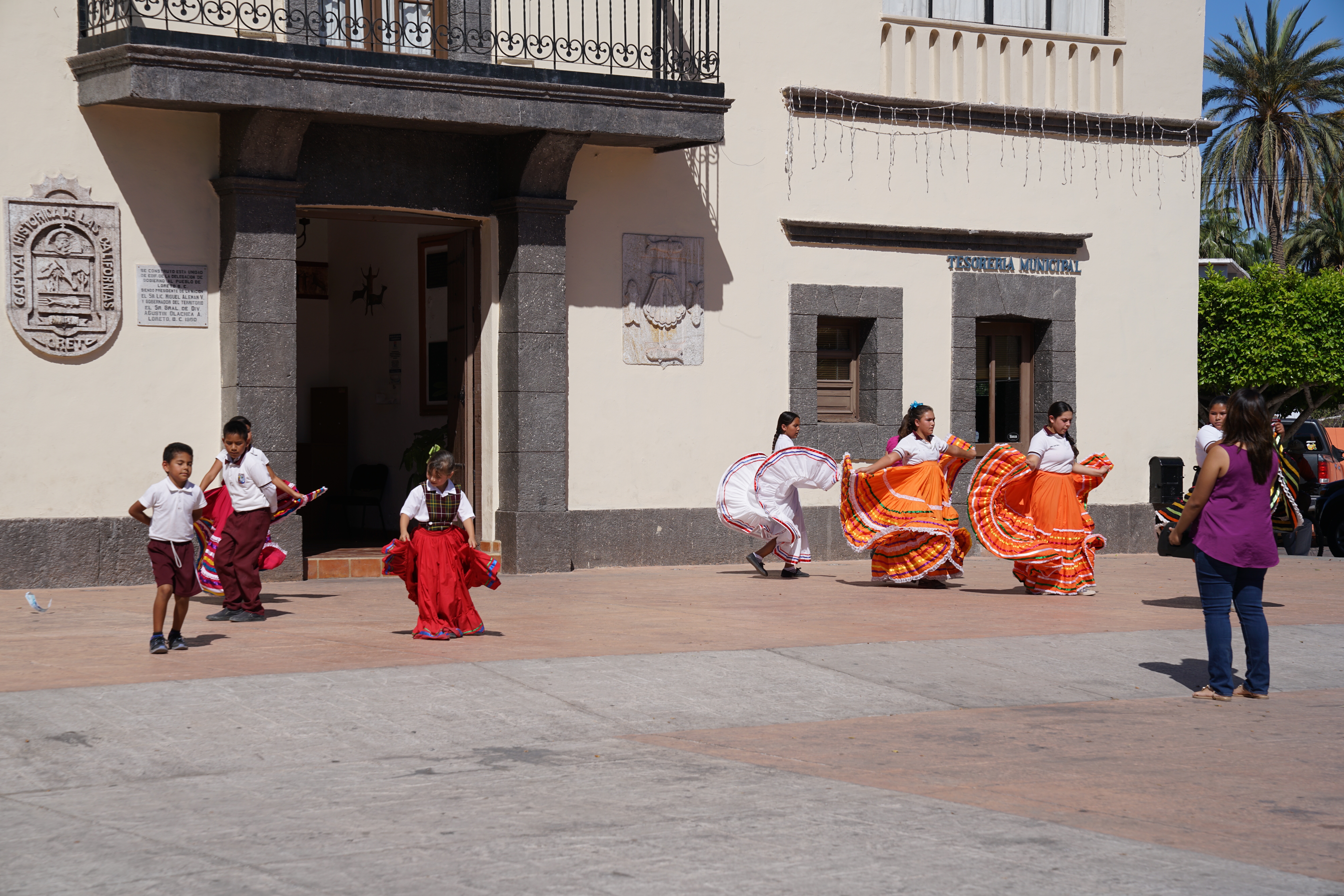 Children dancing in the town square 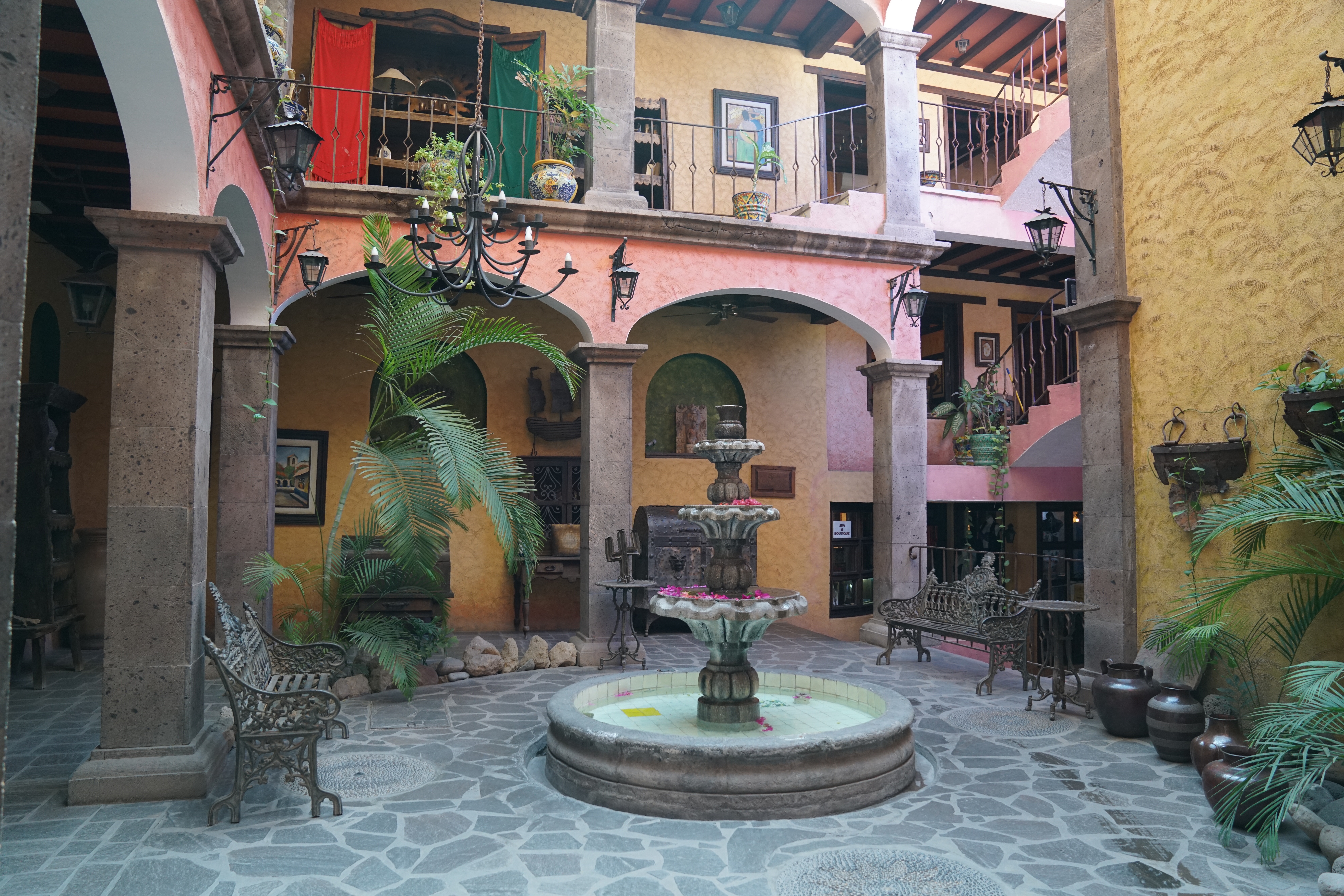 We left Puerto Escondido on April 26 at 8:00 a.m. and headed for Timbabiche, arriving at 3:30 p.m. We motor sailed the whole way in benign conditions. A local man by the name of Manuel caught some fish for us the next morning. We gave him money, milk, canned corn and beer. 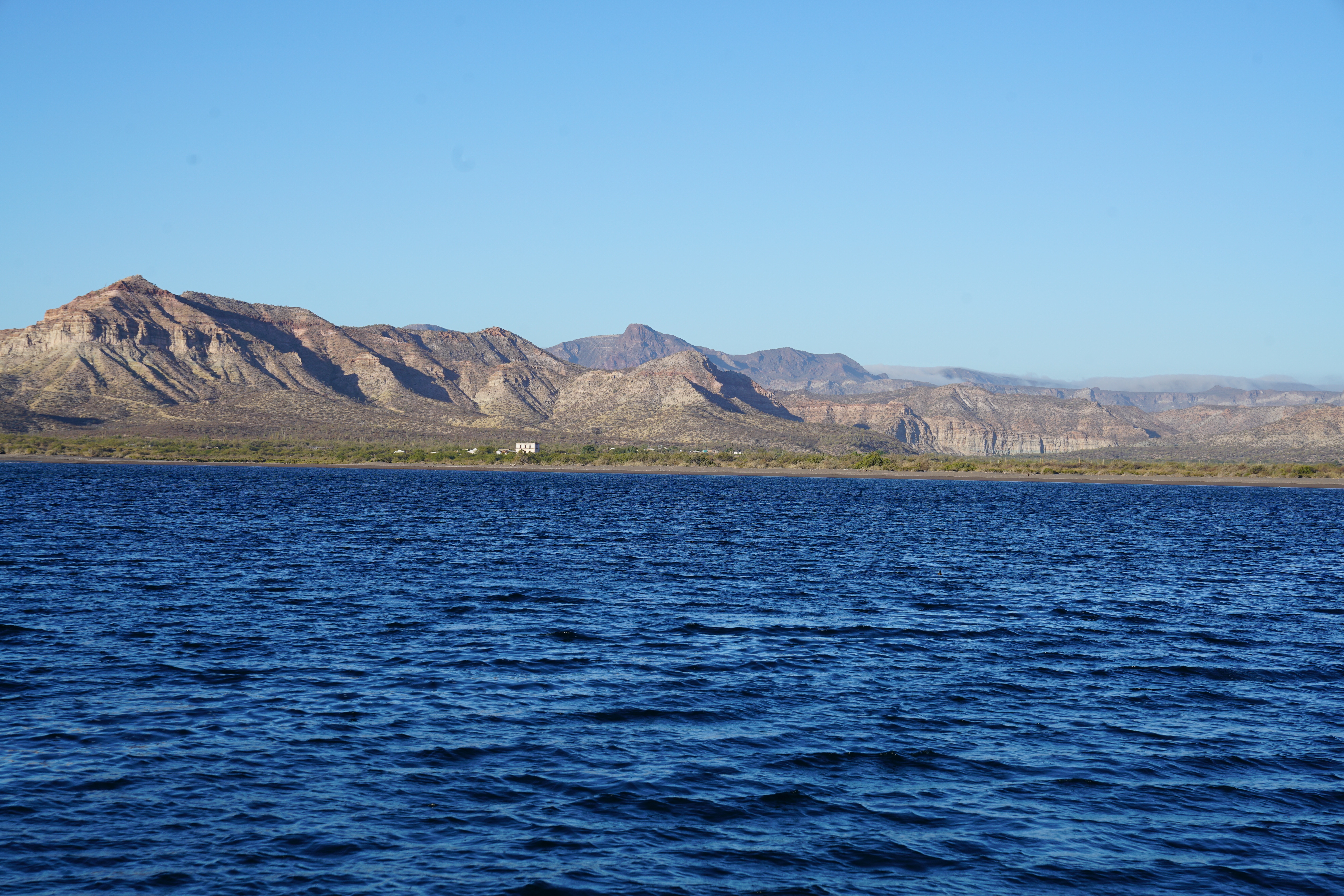 We left Timbabiche that morning at 8:30 a.m. and arrived at the east anchorage of Isla San Francisco at nearly 5:00 p.m.  The going had been difficult, getting through the San Jose Channel in big seas and big winds on the nose from the south/southeast. We had the main up, the jib out and the motor going, and played the wind shifts to make the trip as short as possible. We arrived to find Redwood Coast II in the same anchorage. El Gato arrived shortly after we did. We never got together with either boat because it was too windy for any of us to get off our boats.

That night was an uncomfortable, windy, rolly night. El Gato left early to head north and Redwood Coast left later that morning. I stayed on the boat all day as the wind whipped through the anchorage, while Matt did manage some free diving to spear fish. (So we had good fresh fish for dinner.) We were joined in the anchorage by the unusual boat, Westward, which towed in a disabled sailboat. Later, the Sea Shepard research boat, Martin Sheen, arrived in the anchorage for a brief overnight stay. We had another uncomfortable night, but no quite as bad as the previous night. 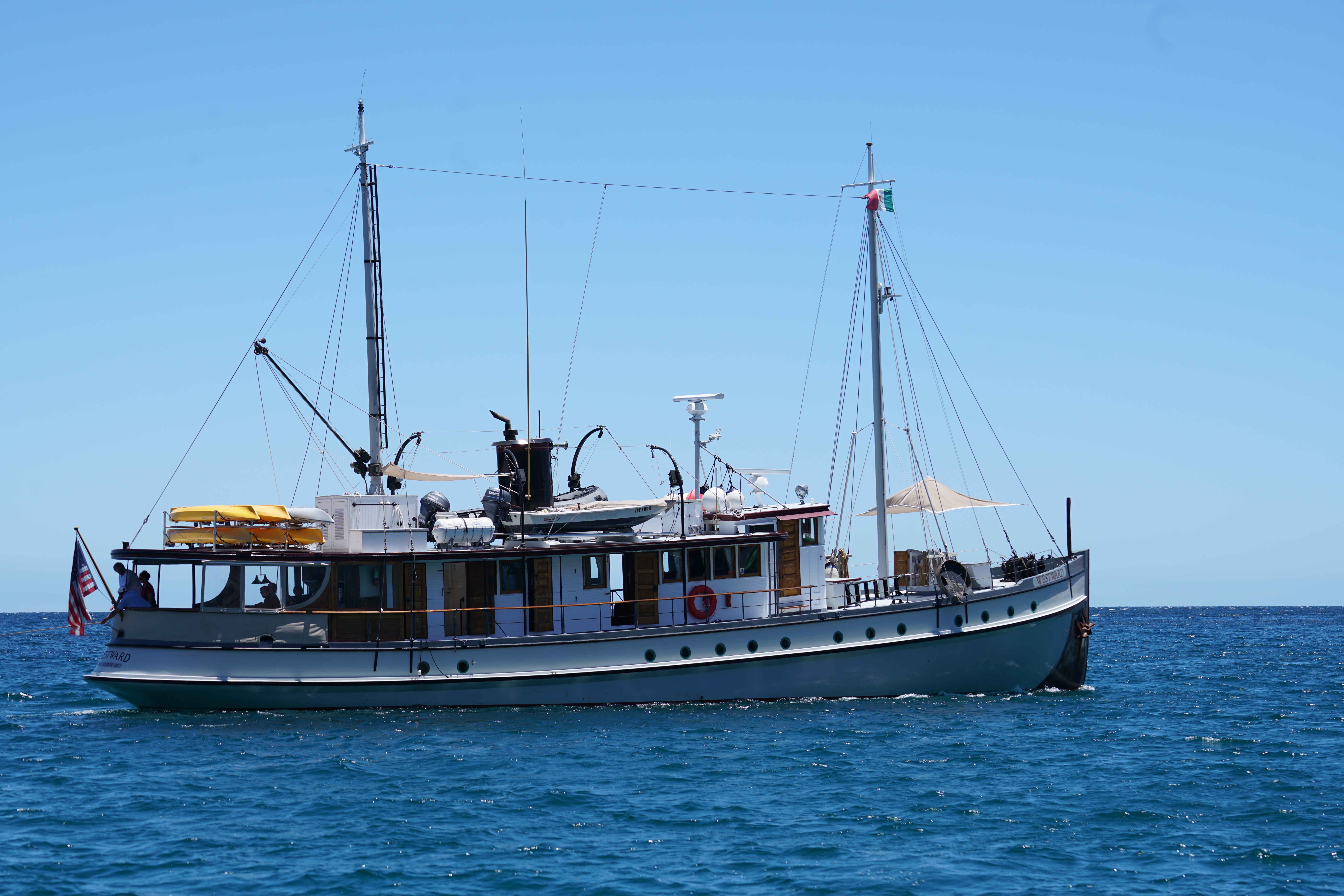 The following morning, the Martin Sheen left early, and Westward left a bit later with the disabled boat in tow. We were alone in the anchorage with a large powerboat. I did a little bit of snorkeling and Matt caught more fish. The wind started coming around from the north, so before dinner, we picked up the anchor and moved around to the west side of the island for a calmer night, leaving early the next morning for the 44-mile trip back to La Paz.

During the trip back to La Paz, we had 15-20 knot winds from behind. We started sailing with just the jib out but big seas kept our speed low. So we added the motor and pretty much flew back to La Paz. Once there, we found our slip and got settled in. After we had our final fish dinner, Rick and Cindy from Cool Change came over for a visit. It was nice to see then after several weeks apart.

We spent the next couple of days cleaning the boat and doing chores, as I prepared to fly back to San Diego for two weeks.