On Saturday morning, July 23, Chris and Julia and I stopped at the fuel dock and refilled the fuel tank and 5 jerry jugs with diesel before leaving the Santa Barbara Harbor bound for Santa Cruz Island. We sailed into southerly 10-15 knot winds and 3- to 4-foot swells. As the wind clocked around to being on the nose, we took in the jib and motor-sailed with the main. It was an uncomfortable ride across the Santa Barbara Channel but we were about an hour away and looking forward to exploring anchorages. That all changed when I slipped on a cockpit cushion and fell into the ignition key. I won’t describe the wound here but it was clear that it required serious medical attention. Most people will probably believe it’s a shark bite. Chris determined that the closest harbor was Santa Barbara so he turned the boat around while Julia and I compressed the wound with a sanitary pad and an Ace bandage. I held frozen food bags on the wound for the three and a half hours back to Santa Barbara.

Chris and Julia dropped the main before we re-entered the harbor. The accommodation dock was full so we tied up at the fuel dock, where Julia and I hopped off. Julia had researched hospitals during the trip back so she summoned an Uber car and we were off to the Santa Barbara Cottage Hospital ER. Meanwhile, Chris stayed with the boat on the fuel dock until they needed room. Once he had to leave, he did an amazing job of getting the boat to the slip and tied up, by himself.

At the hospital, they treated my wound, splinted and wrapped my leg and gave me lessons on using crutches, delivering the news that I would have to be off the leg for two weeks. The trauma doctor treated me on the condition that I would stick around Santa Barbara and return for a checkup in two days. The Southern California part of this trip had just changed from an adventure to a delivery. We would need to get the boat to San Diego without exploring the Channel Islands and without much visiting along the way. We returned to the harbor and Chris pulled me along the long dock to the boat on a rusty hand truck he found unattended near a fishing boat. We liked Santa Barbara and didn’t mind being back in the harbor but they could offer us the slip for only one more night.

The next day, we motored and sailed to Channel Islands Harbor in Oxnard, enjoying the balmy weather. Chris and Julia handled the boat easily as I sat with my leg elevated and made occasional suggestions. After we got situated in a slip, Chris and Julia found a good take-out pizza place nearby and we enjoyed a casual dinner on the boat, on a nice warm night, as people in kayaks, on paddle boards or in electric-powered Duffys cruised the channel.

First thing on Monday morning, Julia summoned another Uber driver and we headed to the Oxnard train station. We had a scenic train-ride back to Santa Barbara and a quick drive to the ER. The staff got me in for a checkup quickly and were pleased that I had followed instructions to stay off the leg. They exchanged the splint for a full-leg brace and sent me on my way. Julia and I returned to the train station after a nice lunch nearby and caught the 2 p.m. train back to Oxnard. When we returned to the boat, we discovered that Chris had been very productive. He had hand-washed his laundry in a bucket and had walked to West Marine and CVS to buy the parts to secure the cockpit cushions so no one else would slip on them. He also had enveloped the ignition key in foam.

On Tuesday, we motored in no wind, flat water and patchy fog toward Marina Del Rey. The fog cleared about the time we rounded Pt. Dume so we had a nice tour of the coastline. 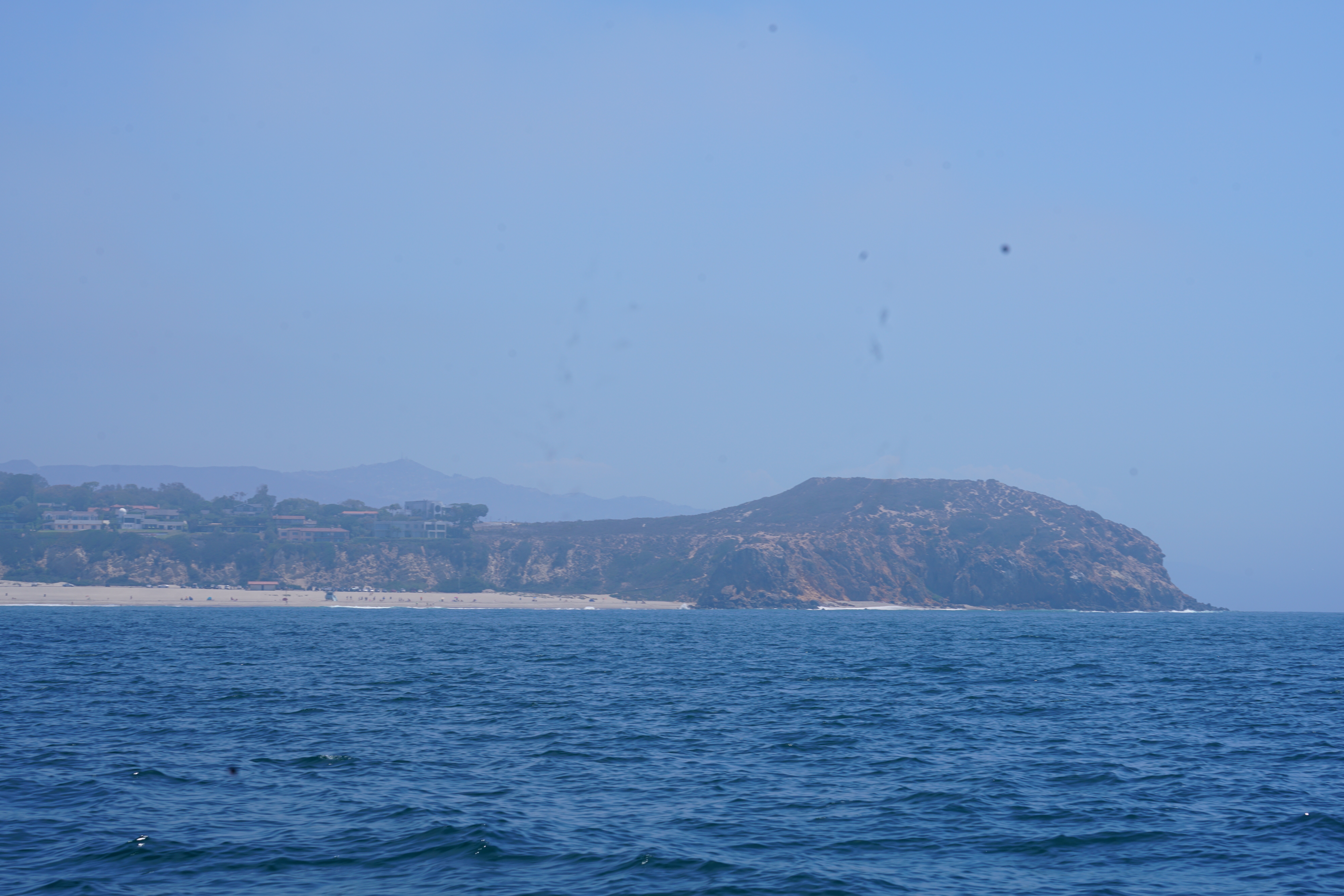 Fog starts clearing as we approach Pt. Dume from the north 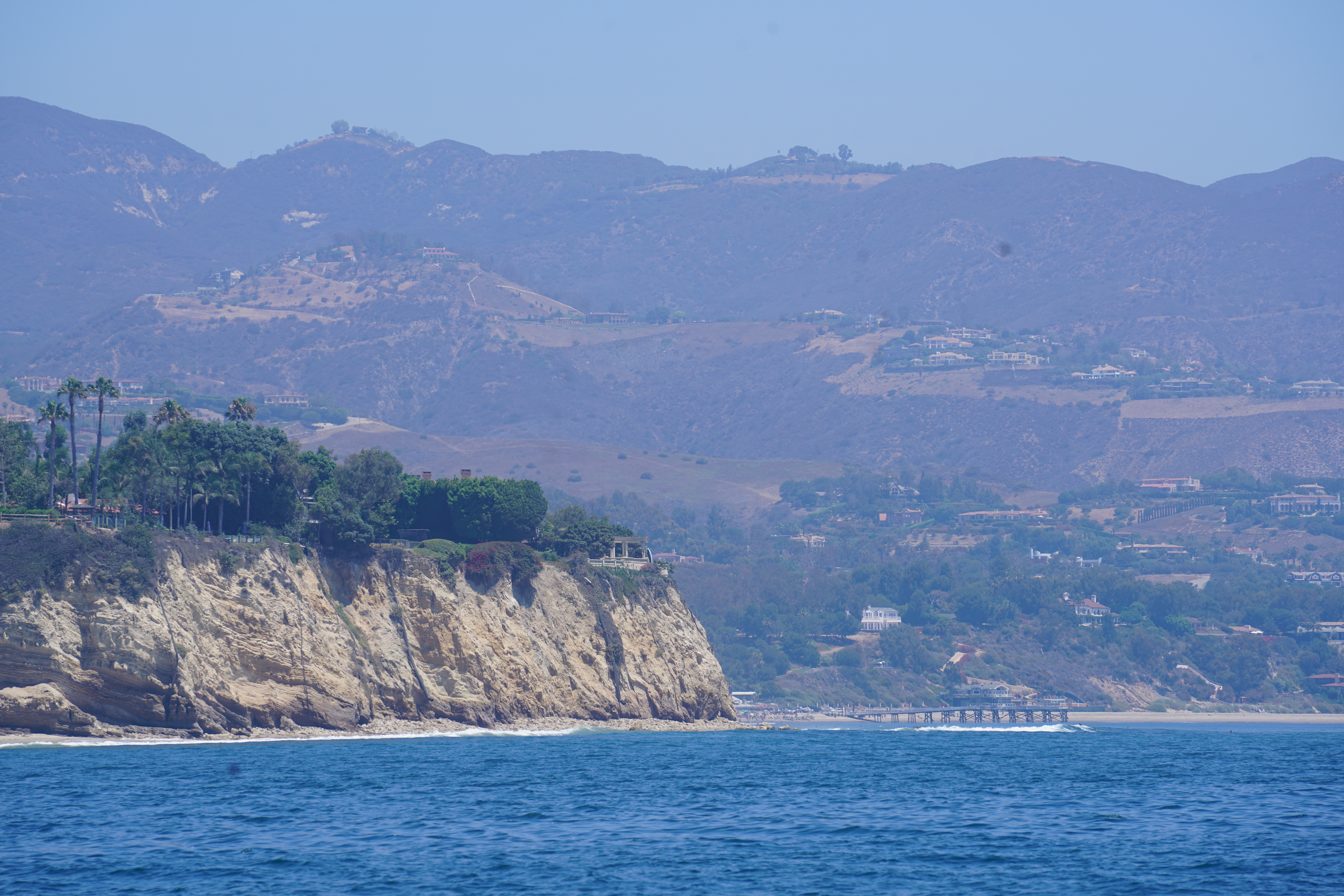 Paradise Cove comes into view as we round Pt. Dume 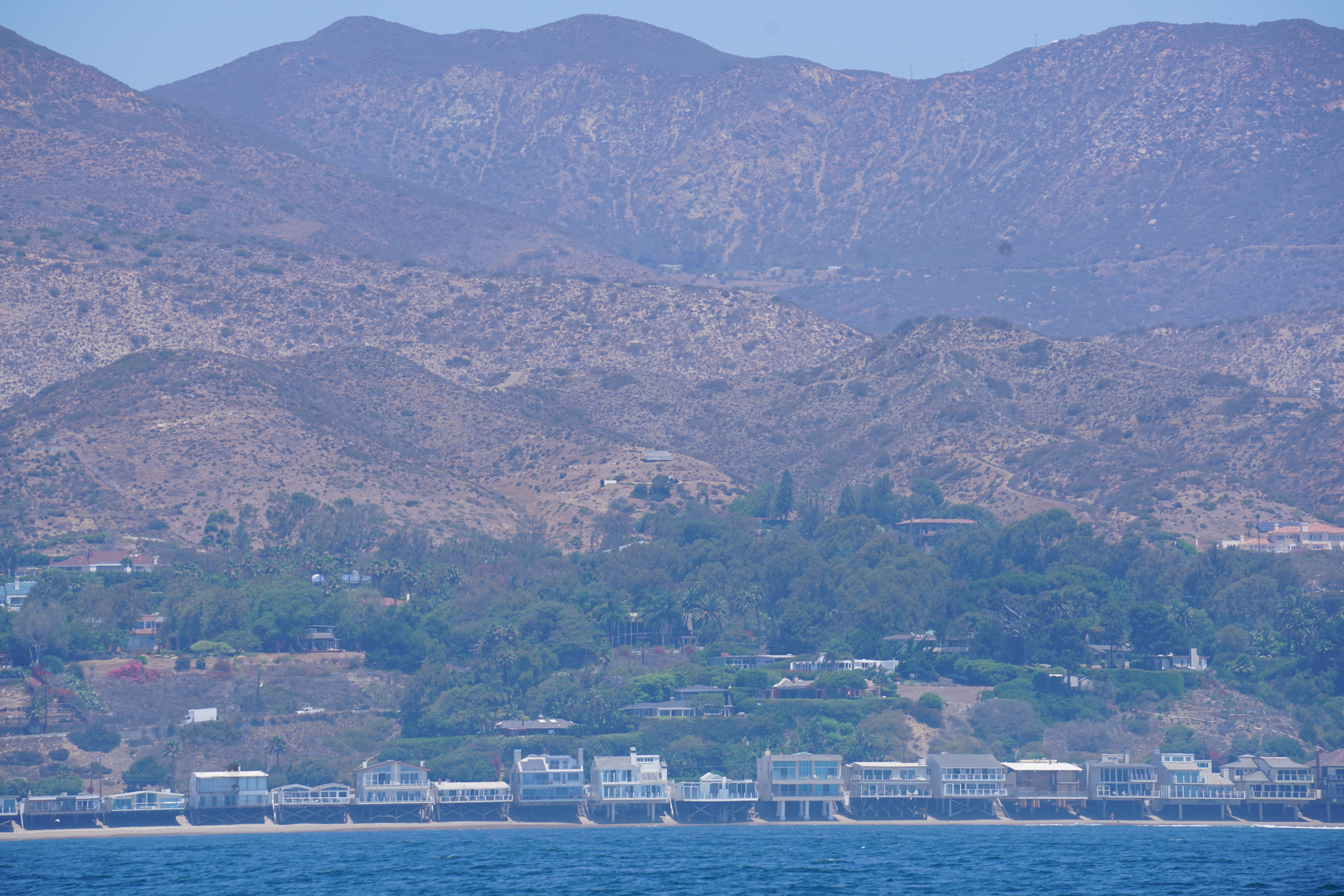 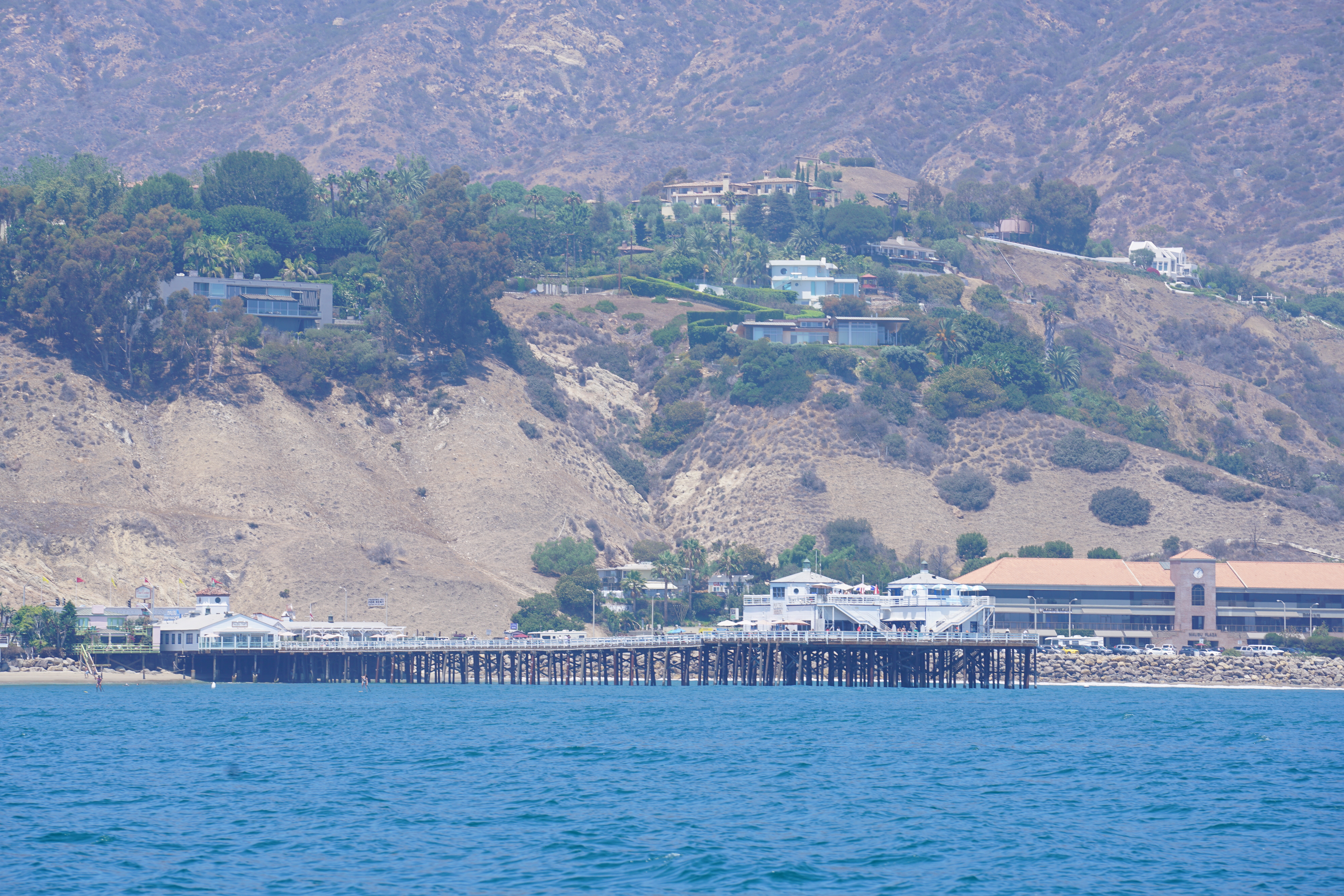 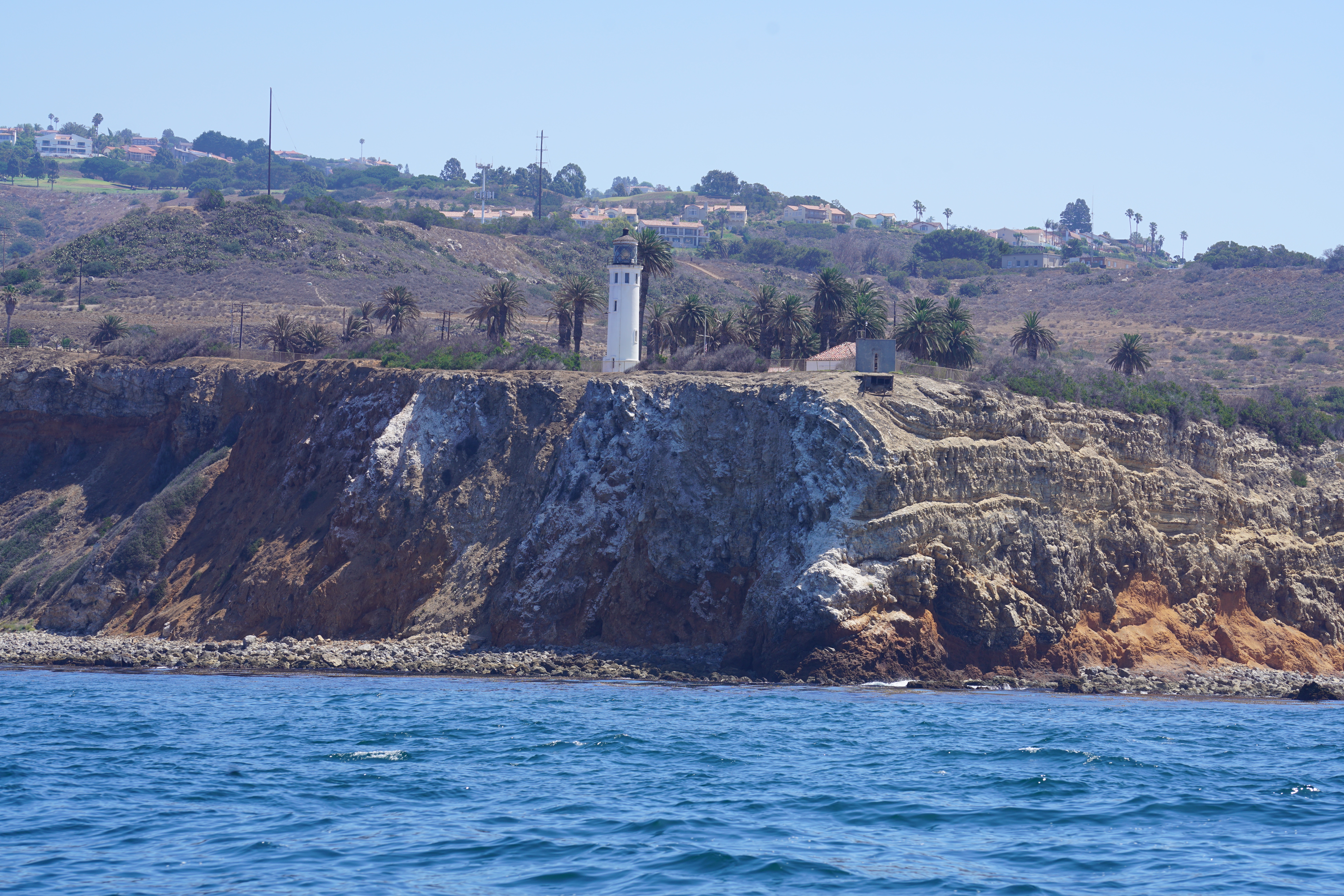 We had made good time so for the last hour  before entering the harbor we turned off the motor and sailed with just the jib. David and Susan Rose had arranged for a slip near their apartment in the marina and helped guide us in. The marina facilities were nice and David’s and Susan’s hospitality even better. They took us up to their apartment for showers and snacks and then out to Mexican dinner. It was a short visit but I’m hoping they can come to San Diego to sail with me when I can actually sail the boat.

On Wednesday we had a scenic trip from Marina Del Rey to Alamitos Bay. After motoring in light winds in the morning, we were able to sail with just the jib in 15-knot winds during the afternoon. We saw lots of dolphins but were never quite prepared with the cameras. We had expected to dodge big ships near the Port of Long Beach but only one ship went in while we were sailing through the area. All the other ships were anchored offshore.  The wind made docking a bit of a challenge but after we were settled in, Julia’s parents (my sister Debbie and her husband John) arrived to take us to their house in nearby Huntington Harbor. We showered and had dinner and John drove Chris and me back to the boat for the night while Julia stayed home to do laundry and sleep in her bed for a night. I wondered whether Julia had had enough, but she returned the next morning with her father for the next leg, to Oceanside. We motored the whole way along the coast in light winds, past the long stretches of Huntington Beach and Newport Beach, then Laguna Beach, Dana Point, San Onofre, Camp Pendleton. It’s nice to see all these places from a different perspective. 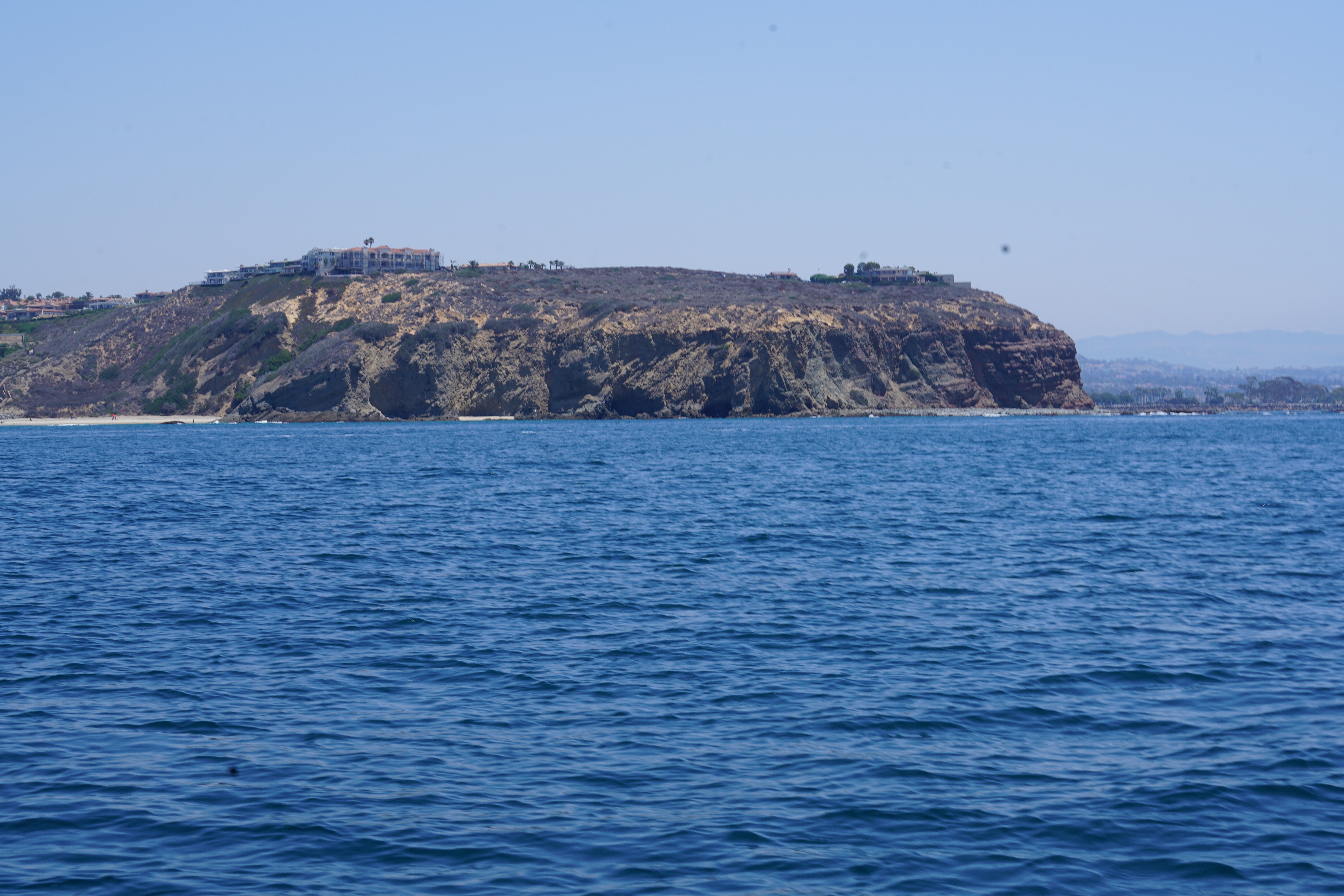 Approaching Dana Point from the north

We docked in Oceanside by mid-afternoon, relaxed on the boat for a bit, had dinner at the Jolly Roger, which was in front of our dock, and bid farewell to John, who caught a train back home. Early the next morning, my brother-in-law, Brian, brought my mother, sister Ann and niece Hannah to join us for the trip to San Diego. We again had to motor the whole way in light wind and 3-ft. swells. Although it would have been a lot nicer to sail, everyone enjoyed the tour of the an Diego County coast. 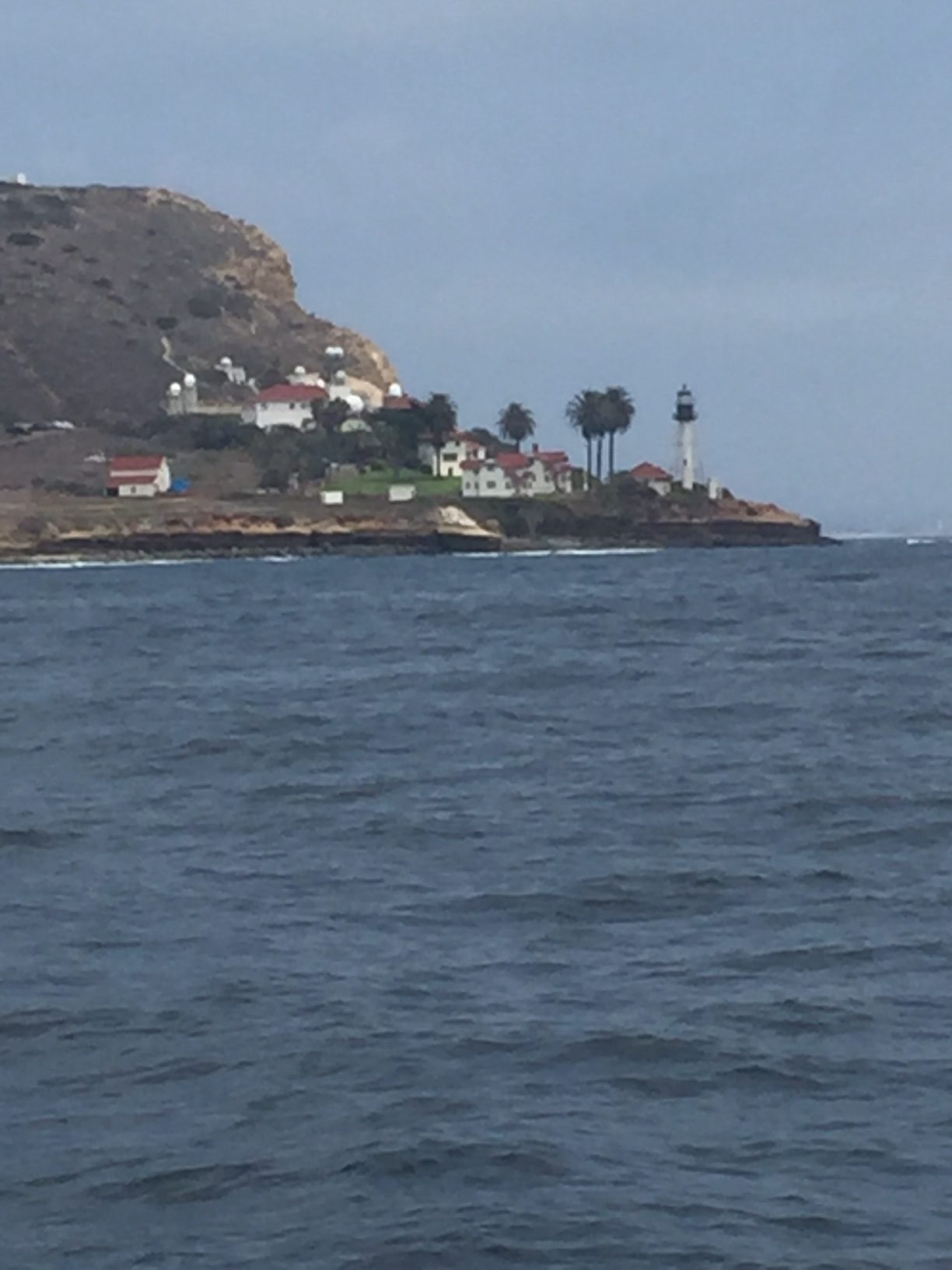 Navigating in the bay that day was tricky as one warship entered port and three left port at the same time. We dodged them and found the Sun Harbor Marina. We were disappointed to discover that the marina has a very narrow fairway and many of the boats stick way out. Getting into the slip was harrowing as Chris backed up and went forward a dozen times while the rest of us fended off near collisions with other boats. I’m not sure how I’m going to get the boat in and out to go sailing. I may just leave the boat in the slip for the first month while I get projects done.

Aldabra is now buttoned up in the marina. Julia has returned to Huntington Harbor and Chris has returned to Santa Cruz. I’m staying at my mother’s house in San Diego and visiting with my family while counting the days (6) before I can move around without crutches.