Aldabra left the Paradise Marina in Nueva Vallarta on the afternoon of December 4 with crew members Vic and Sonja. We had a mishap getting out of the slip. Another boat had been squeezed into our slip with only about a foot between the two boats. A 3-knot current was running. I should have asked the marina for assistance getting out. Instead we snagged parts of our boat on the other boat, doing some damage to both boats. Another of many learning experiences.

Once out of the marina, we were able to sail west across Banderas Bay in light winds. We rounded the infamous Cabo Corrientes that night without any drama, sailing at first and later under motor power when the wind died. We arrived in Bahia Chamela on Tuesday morning to an almost-empty bay, sharing it with our friends on El Gato. We stayed in Chamela just a few days, taking time to kayak over to the rocks at Punta Pérula, to walk along the beach and along the main road in town, and to have dinner at the Scuba Jazz Cafe with our friends from El Gato and Dolce. Our dinghy landings and takeoffs were wet but upright.

From Chamela we went on south to Tenacatita, arriving on Friday afternoon, just in time for the Friday evening raft-up with other cruisers, hosted by Rob and Virginia on Harmony. The cruisers raft their dinghies together and share stories and food. It was nice to get acquainted with the other participants.

While in Tenacatita, El Gato and Aldabra took our dinghies up the river to the beach near The Aquarium, a good snorkeling spot and anchorage in fair weather. Our motors scared many of the birds, so I think (now that I have done this river trip 3 times in a dinghy) I won’t take this this trip again unless in a kayak. We had lunch and went for a swim before heading back down the river. Like Chamela, Tenacatita offers good swimming right off the boat. We also took some time to work on the water system, which is full of irritating mysteries, and to re-secure the cross-bar for the dinghy davits, which was losing the nuts off the bolts. Vic climbed up to use the solar panels as a working platform to complete that precarious job. While in Tenacatita, we had the opportunity to get better acquainted with Steve and Shaunna on Wind Rose and George and Sue on Julia Max, the latter two are making their way south to go through the Panama Canal this next year.

We left Tenacatita on December 11 and motored to Barra de Navidad, with one slight detour just to check out the anchorage at Cuastecomate. Once in the marina in Barra, we pulled into a slip on the same dock as El Gato, which offers the farthest-possible walk from the boat to the bathrooms. But all the people on the dock are very nice, so we have made it our home for the month of our stay. 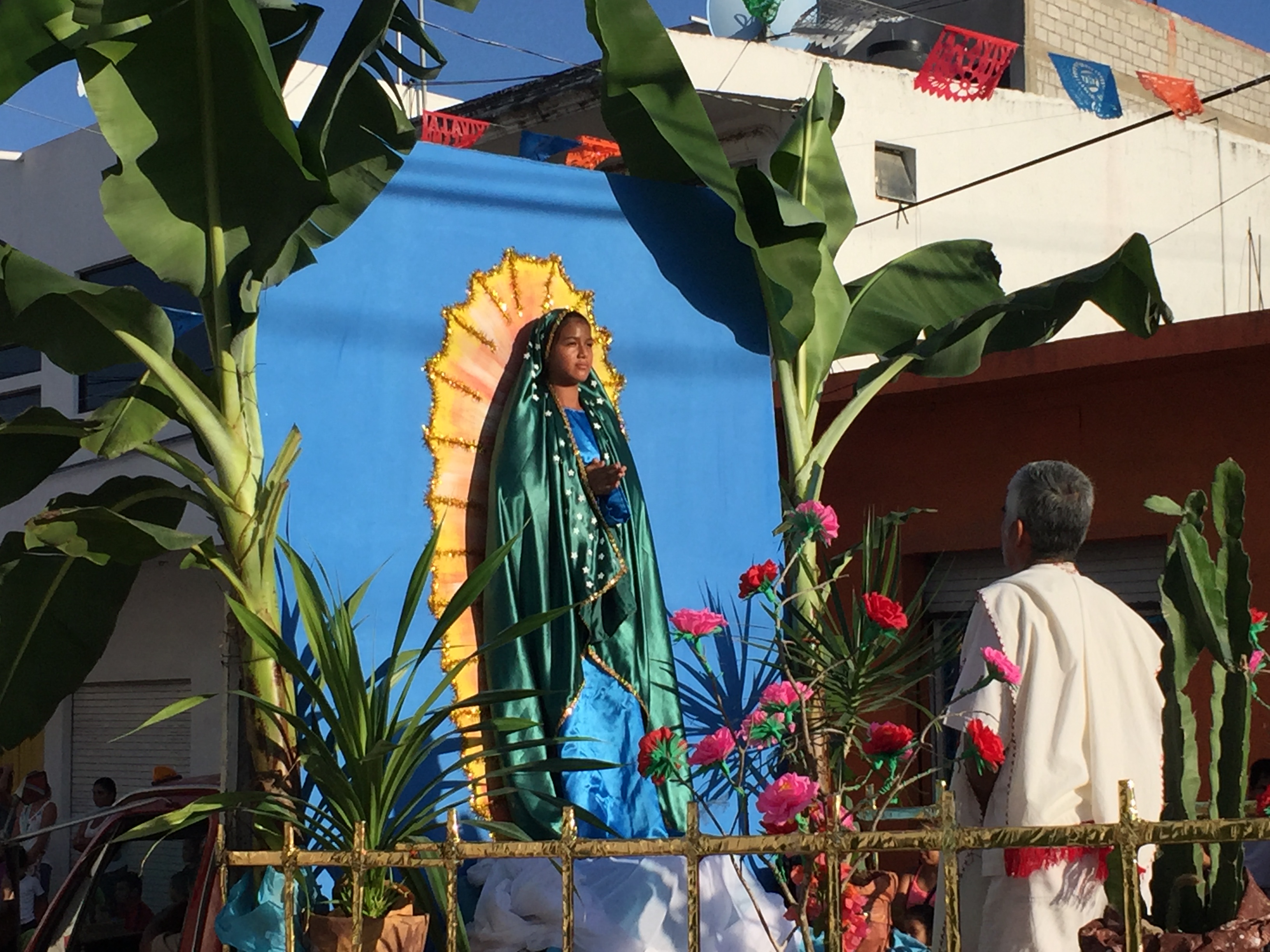 On December 12, Jules from El Gato and crew Sonja and I went to the celebration for the Virgen de Guadalupe in a nearby town called Cihuatlán. Dance groups from the surrounding area danced parade-style through the main street to the beat of drums. The bright and imaginative costumes drew from all aspects of the culture. And interspersed with the dance groups were roving “bad men,” representing things evil to counter all the goodness represented by the Virgen de Guadalupe.

Vic and Sonja each departed the next day, so I began my daily mixture of getting chores done, hanging with friends by the pool or getting dinner in the town of Barra. Many boats began to arrive in anticipation of the cruisers Christmas dinner. So it has been fun to see old friends, such as Myla, Catatude, Carmanha, Jolly Dogs and Liahona, and to meet lots of new people. There were more than 80 people at the dinner, organized by Jake on the boat Jake and the people on other boats who have done this dinner once or twice before. The organizers provide the ham and turkeys and the participants each bring a dish to share and a white-elephant gift. The food was great and the gift exchange featured a wide range of gifts and lots of laughter. 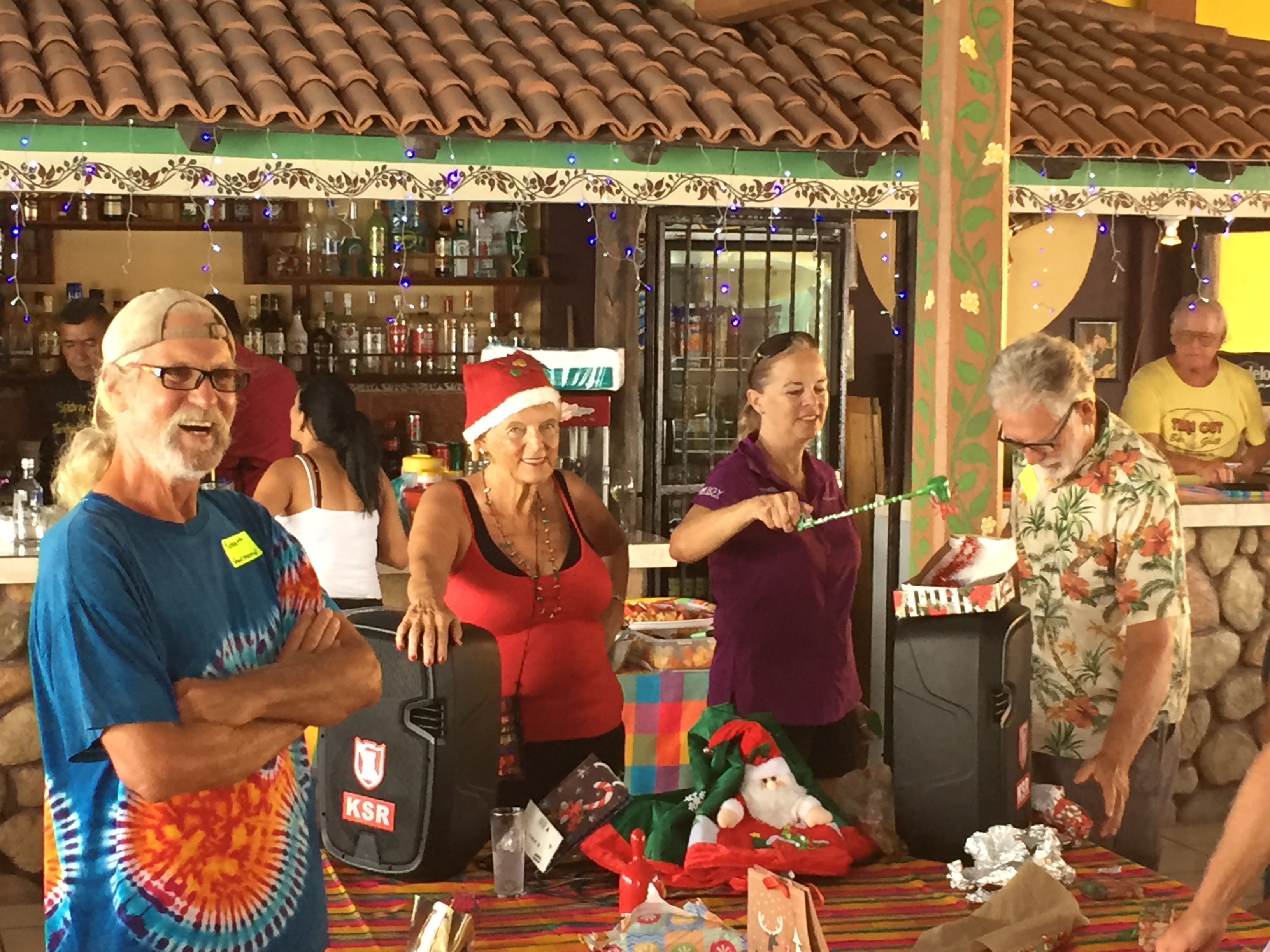 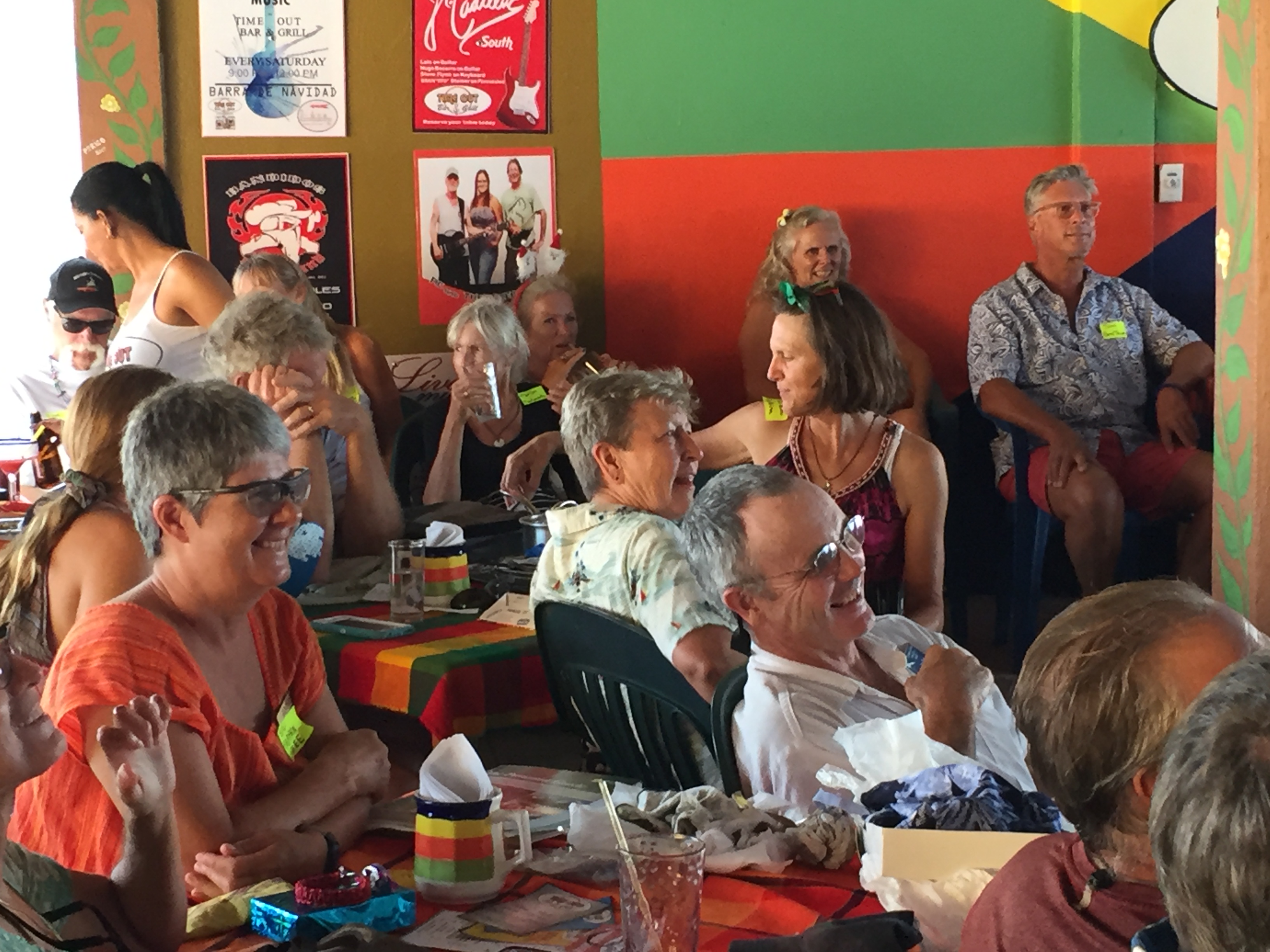 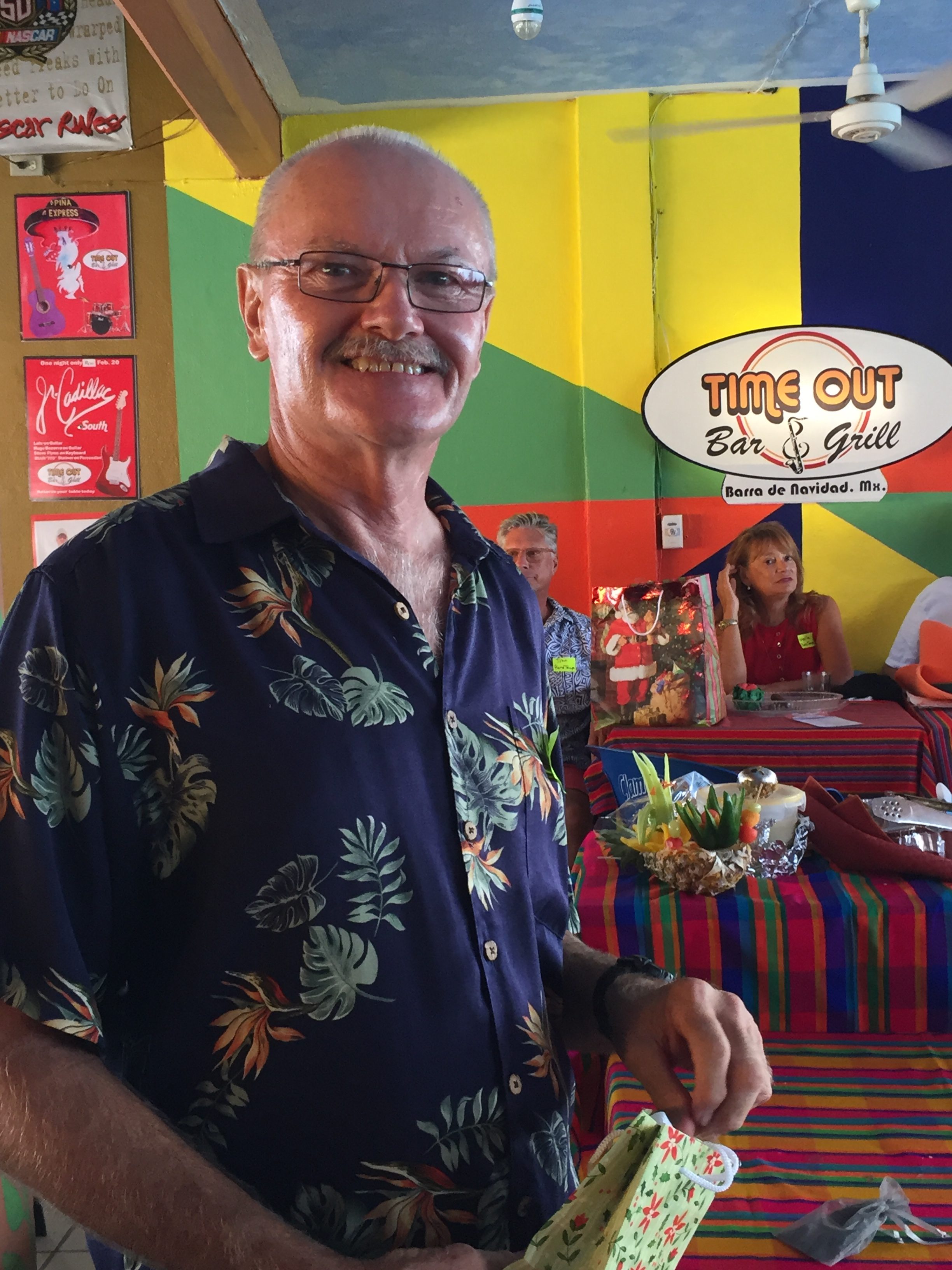 Jake is the Main Organizer of the Dinner

The day before Christmas, the guys who organize all the boat work in the marina hosted a Posada celebration for the cruisers. They served a traditional goat meal and brought in a couple of piñatas. I received a prize for being the first person to arrive at the fiesta, which was fun because I got to meet the families of the organizers.

Posada Organizer Arturo and his Daughter

I’ve had the pleasure of hanging out with Jeff and Jules on El Gato a lot. We’ve taken a couple of trips to Melaque to the markets, paddled in the lagoon and had pool-time and meals together. Jules and I have also been taking yoga on the beach in the mornings. And Jeff has helped me with boat projects, such as sorting out the mysteries of the fresh water system, making the dinghy more secure when it’s on the davits underway, servicing my diesel motor and filling the fuel cans. I also joined them on their boat for a day trip over to Cuastecomate for some snorkeling. They helped me look after Daisy, a sweet dog that lives with Tom and Helen on Catatude. They went to the U.S. to be with their family for the holidays, so I spent the nights with Daisy on Catatude and went  back and forth between my boat and Daisy’s boat during the day. Daisy is a bit of an escape artist so she kept me on my toes.

Yoga on the Beach

Lots of old friends and new friends have been here in Barra during the first couple of weeks of January. It has been great to see Stephanie and Mark on Wainui and to hang out with Tony and Diane on Dolve and Duey and Nan on Flight.

I have a sore tooth so I rented a car last week to drive to Puerto Vallarta to see an endodontist. Turns out nothing can be done at this point so I’ll have to tough it out for a while. The trip between PV and Barra is a long one but I did some grocery shopping while I was there. After I returned, Jules and I took advantage of the rental car and drove southwest to the towns of Coloma and Colmilla. Coloma is a Puebla Magica and very charming. We met this wonderful chef by the name of Piter, who has a restaurant called Paraiso on Avenida Ignacio Allende. I highly recommend a visit. He was the chef for the Las Hadas resort for many years and is also a professor of culinary arts. While in the area, we got as close as we could for a view of the local volcanos and walked to a wonderful little museum near Coloma with a collection of pre-columbian art.

I’ll be leaving Barra de Navidad next Tuesday, January 16 with Tony and Diane from Dolce as crew. They will leave their boat in the marina here while we sail to Zihuatanejo by way of Bahia Carrizal and Bahia Santiago. I hear the organization of SailFest is already underway, so I look forward to getting to Zihuatanejo to help out.

The Closing of Aldo’s